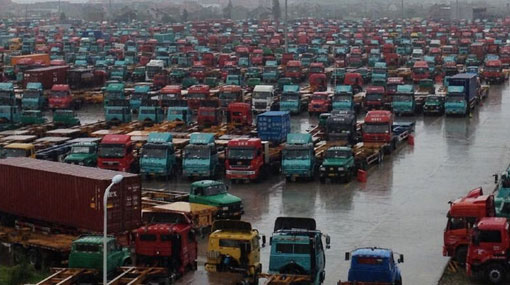 Eleven more trade unions have today joined to the strike action launched by container truck drivers at the entrance to the Colombo Port.

Chairman of the Federation of Container Transport Owners’ Association, Udeni Kaluthanthri, said that the strike launched from 11.00am yesterday, in protest of the decision taken by authorities to permit additional container trucks to operate at the port, is still continuing for the second day.

He stated that the transport of import and export containers has completely halted and that if they are prompted to expand the strike action, it would result in immense losses to the port as well as the government.

Mr Kaluthanthri stated that around 12,000 container trucks currently provide transport services at the port despite the existence of space for only 2,000 trucks to operate on a daily basis.

Despite this situation, officials in the “good governance” government are attempting to assign another 1,500 container trucks, free of customs duty, to operate in the Colombo Port, he claimed.

Mr Kaluthanthri charged that 250 out of those 1,500 container trucks have already been provided transport permits and that the rest would also be given permits in the near future. He emphasized that the government should intervene immediately and resolve this issue.

TAGS :  Federation of Container Transport Owners Association ,  container truck drivers ,  Udeni Kaluthanthri ,  Colombo Port ,
Disclaimer: All the comments will be moderated by the AD editorial. Abstain from posting comments that are obscene, defamatory or slanderous. Please avoid outside hyperlinks inside the comment and avoid typing all capitalized comments. Help us delete comments that do not follow these guidelines by flagging them(mouse over a comment and click the flag icon on the right side). Do use these forums to voice your opinions and create healthy discourse.