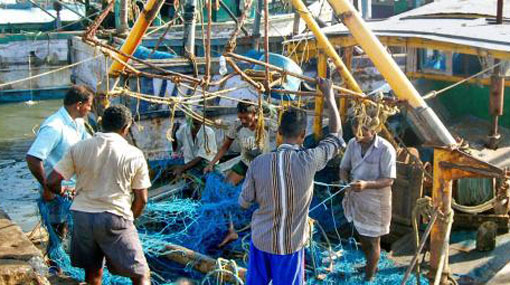 A 19-member Sri Lankan team, comprising 10 leaders of fishermen and nine officials, will be participating in the talks between the fishermen’s associations of Sri Lanka and India to be held in Chennai on March 24 and 25, officials said on Saturday.

This will be the third time the fishermen’s associations of the two countries are meeting to thrash out the issue of fishing in the Palk Strait and Palk Bay.

The first meeting was held in Chennai on January 27, 2014, and the second was held in Colombo on May 12, 2014. However, these talks had failed to resolve the issues.

Recently, Lankan Prime Minister Ranil Wickremesinghe had said in two media interviews that Lanka has the right to shoot intruders, an assertion which raised  political hackles in India. So far, the Lankan government has only arrested the intruders and detained their boats. There has been no shooting since 2011.

In the meantime, India and Sri Lanka had agreed to release the fishermen and boats simultaneously. Recently, 43 fishermen and 34 boats were repatriated to India. India has also released Lankan fishermen who were in its custody. As on date, there is no Indian fishermen in custody of Lanka, though 50 Indian boats remain to be repatriated. – The New Indian Express

TAGS :  India ,  fishermen ,  Ranil Wickramasinghe ,
Disclaimer: All the comments will be moderated by the AD editorial. Abstain from posting comments that are obscene, defamatory or slanderous. Please avoid outside hyperlinks inside the comment and avoid typing all capitalized comments. Help us delete comments that do not follow these guidelines by flagging them(mouse over a comment and click the flag icon on the right side). Do use these forums to voice your opinions and create healthy discourse.