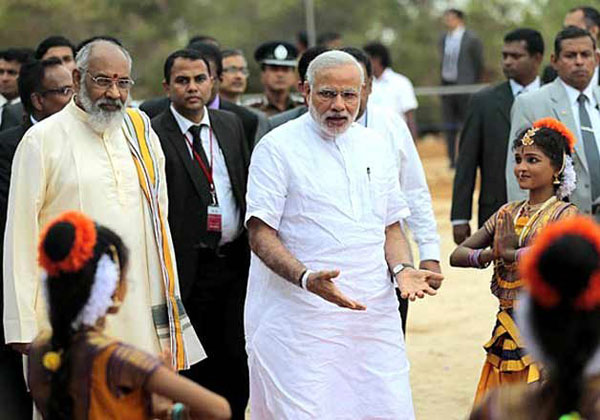 Indian media had reported a suspected security lapse that set off alarm bells in Modi’s entourage when a Sri Lankan youth broke the security cordon in Jaffna and walked up to within handshaking distance of the PM as he was about to board his car following a public event there last Saturday.

However, the Official Spokesperson of the Indian External Affairs Ministry Syed Akbaruddin denied the reports terming them as “fiction masquerading as fact” and that nobody present at the time saw such an event unfold.

“Let me tell all of those who were there, there was no such information available. However, if you do not believe me, videotapes are available. I think many of you who have traveled there have video because video recordings are available wherever the Prime Minister went including there. My understanding is there were at least 25 cameras there.”

“Several of you who are here were also there. I did not see this. Nobody else saw this. Nor did the cameras capture it. But still it is being passed off as fact. My answer is, what is not true cannot be fact. This is not true,” Akbaruddin added.

The New Indian Express had reported that the Special Protection Group (SPG) is “looking into” the incident given that two of its officials were responsible for the section of the security cordon that the youth allegedly breached.

The Prime Minister’s Office is monitoring the probe and the R&AW and the Ministries of External Affairs and Home are also part of the investigation, the report claimed.

What is our status on fishermen issue? Is our Government going to organize any negotiation with Sri Lankan fishermen or anything?

Meanwhile speaking on the status of the Indo-Lanka fishermen talks, Akbaruddin stated that the issue which has figured during high-level discussions between India and Sri Lanka was taken up by Prime Minister Modi recently when he visited the country.

“And as an outcome we have said that as a first step the two fishermen associations across the Palk Straits should meet. We are now working for this and hope that they would meet at the earliest,” he said.

TAGS :  Narendra Modi ,  Jaffna Cultural Centre ,  Jaffna ,  Syed Akbaruddin ,  India ,  fishermen ,
Disclaimer: All the comments will be moderated by the AD editorial. Abstain from posting comments that are obscene, defamatory or slanderous. Please avoid outside hyperlinks inside the comment and avoid typing all capitalized comments. Help us delete comments that do not follow these guidelines by flagging them(mouse over a comment and click the flag icon on the right side). Do use these forums to voice your opinions and create healthy discourse.