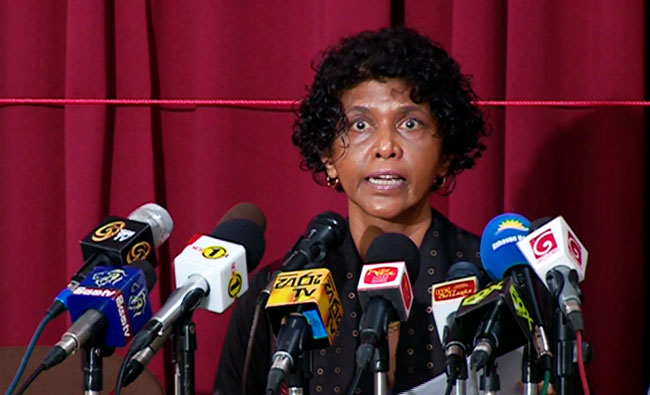 Mangala is a liar  Tamara

The former Ambassador said it horrifies her that Sri Lanka should lose its credibility internationally simply because its foreign minister “is a liar.”

Last year, the ex-diplomat had alleged that a contract to renovate the official residence of the Sri Lankan Permanent Representative in Geneva had been awarded to an organisation affiliated with the LTTE and had called for an audit into the renovation work.

Ms Kunanayakam held a press conference in Colombo this morning to share her “concerns” regarding an “outrageous” statement made by the Minister to a television channel, while speaking regarding the audit report and the recent appointment of Kshenuka Seneviratne as Ambassador to Thailand.

The Minister has said: “We must find out about the person who is continuously making this accusation. Because this person Tamara Kunanayakam also is the one in 1989-1990 came forward on behalf of the LTTE at the United Nations and to the Human Rights Council, she is a well know person. Having functioned as a member of the pro-LTTE World Council for Churches I’m surprised that her pointing the finger at others saying they are pro-Tigers.

“However, if it is considered necessary I don’t mind going through the papers and conducting an inquiry into this. However, since we have to follow ‘Yaha Palanaya’ (Good Governance) just because some king or another person or a woman whose hopes have been dashed makes a complaint we can’t act upon it,” he had said.

Responding to what she termed as a “slanderous statement”, Ms Kunanayakam said that the minster has misused the fact that she is Tamil to brand her as having come forward on behalf of the LTTE.

“I believe that he has misused the fact that I’m a Tamil to automatically brand me as having come forward on behalf of the LTTE, an organization that I have consistently and relentlessly fought against and criticized throughout my private and professional life.”

“The minister offered no arguments and no proof - because there is none. Why did the minister misuse public space and cast such a vicious accusation against me?” she asked.

The former Permanent Reprehensive and Ambassador of Sri Lanka to the UN in Geneva further said that only a day after having made this “defamatory statement”, Minister Mangala Samaraweera told Parliament that the government will review the ban on a list of Diaspora groups and individuals “as there was no tangible evidence to link them to the LTTE.”

Ms Kunanayakam stated that what troubles her more is that the minister represents her country abroad and that he is “abandoning the very promise that brought him and his government to power.” “The promise for a new and different Sri Lanka.”

She said that it is indeed “shocking” that the Minister of External Affairs of the country should summarily dismiss the findings of the Auditor General of the country, simply as a complaint by a woman whose hopes have been dashed and say the government can’t act on it because it has to follow ‘Yaha Palanaya.’

“If that is the kind of ‘Yaha Palanaya’ the government has promised to the people of Sri Lanka and we see unfolding before our eyes - only some 70 days into the 100-day programme, then the people should be beware of surrendering their sovereignty to politicians who have nothing but contempt for ordinary citizens of this country,” she said.

“As a former Ambassador of Sri Lanka it horrifies me that this country should lose its credibility internationally simply because its foreign minister is a liar.”

“Playing on racist and chauvinist anti-Tamil sentiment just so he can eliminate the person that he considers dangerous, is not only week but it is devastating for the image of the country.”

“In my mind such a person is unsuitable to represent Sri Lanka internationally,” Tamara Kunanayakam said.

TAGS :  Tamara Kunanayakam ,  Mangala Samaraweera ,  UN ,  Geneva ,  Kshenuka Seneviratne ,
Disclaimer: All the comments will be moderated by the AD editorial. Abstain from posting comments that are obscene, defamatory or slanderous. Please avoid outside hyperlinks inside the comment and avoid typing all capitalized comments. Help us delete comments that do not follow these guidelines by flagging them(mouse over a comment and click the flag icon on the right side). Do use these forums to voice your opinions and create healthy discourse.