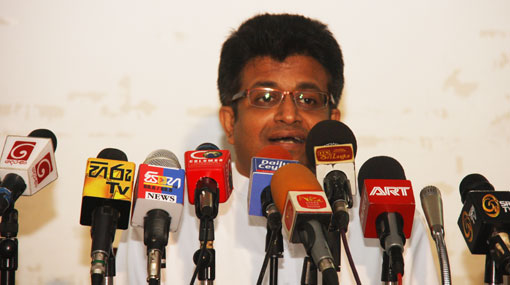 Leader of the Pivithuru Hela Urumaya, Provincial Councilor Udaya Gammanpila, says that there is a risk of the Tamil National Alliance (TNA) being offered the position for Opposition Leader.

If that happens the ideals of the TNA would receive wider acceptance within the international community, he told reporters in Colombo today.

He stated that on the other hand if the Tamil National Alliance does not receive the Opposition Leader post it could spread the word intentionally that the reasons for that was because they are Tamils.

Speaking on the forming of a National Government with the UPFA and UNP, the Western Provincial Council member stated that the current situation is a win for the JVP, TNA and UNP but a loss for the Sri Lanka Freedom Party.

He stated that in 1956 Talduwe Somarama Thero shot and killed the founder of the Sri Lanka Freedom Party, S. W. R. D. Bandaranaike, and that another group of ‘Somaramas’ politically assassinated him once again in 2015.

The former JHU Legal Advisor stated that just as Talduwe Somarama Thero was punished by the law back then, the current ‘Somaramas’ will get their punishment at the next General Election.

Leader of the Mahajana Eksath Peramuna, Dinesh Gunawardena, also speaking at the press event, emphasized that the existing regime is not a National Government but a Coalition Government, created by ‘plucking’ a group of MPs from the opposition due to political bankruptcy.

The former Minister also said that the United People’s Freedom Alliance (UPFA) has taken no political decision to support the government and that there is no consent for that.

TAGS :  Udaya Gammanpila ,  Talduwe Somarama Thero ,  UPFA ,  SLFP ,  JVP ,  UNP ,  TNA ,  Dinesh Gunawardena ,
Disclaimer: All the comments will be moderated by the AD editorial. Abstain from posting comments that are obscene, defamatory or slanderous. Please avoid outside hyperlinks inside the comment and avoid typing all capitalized comments. Help us delete comments that do not follow these guidelines by flagging them(mouse over a comment and click the flag icon on the right side). Do use these forums to voice your opinions and create healthy discourse.