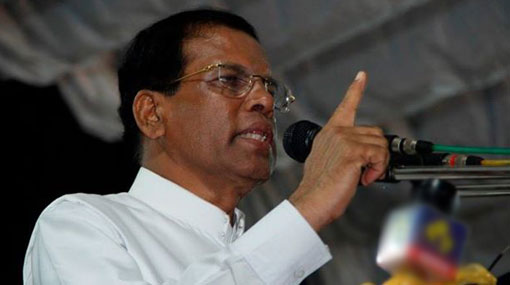 Maithripala Sirisena swept to power in January, ending a decade of rule by Mahinda Rajapaksa, whose close alliance with Beijing had irked the island’s traditional close ally India.

Sirisena has moved to wind back Beijing’s influence, which became the strategically located island’s biggest foreign financier and enjoyed significant political and even military influence under Rajapaksa.

Sirisena has unnerved China by suspending a $1.4 billion “port city” project in Colombo that India considered a security risk, and ordering a review of other Beijing-financed projects and loans amid allegations of corruption.

Experts say the president will be seeking a divorce of sorts from China during the three-day state visit starting on Wednesday, while trying not to upset the economic giant.

Sirisena will hold talks with Chinese President Xi Jinping along with other members of the leadership, Colombo said.

Sirisena made India – rather than China – his first foreign trip after winning the January elections, seeking to rebuild ties with Delhi damaged by tensions over Beijing’s influence on the island.

Delhi was reportedly furious after Chinese submarines were allowed to dock at Colombo port last year when Rajapaksa was still in power.

Beijing has been accused of seeking to develop facilities around the Indian Ocean in a “string of pearls” strategy to counter the rise of rival India and secure its own economic interests.

Indian Prime Minister Narendra Modi visited Sri Lanka and other Indian Ocean nations in March in a bid to counter that influence, and reassert Delhi’s traditional role in the region.

Sri Lanka Foreign Minister Mangala Samaraweera, who visited Beijing a month after Sirisena came to power, has said the new administration will not allow Chinese submarines in Colombo.

Colombo is also seeking to renegotiate huge loans given by China for projects at rates as high as 8 per cent, Sri Lanka Finance Minister Ravi Karunanayake told reporters recently.

China had emerged as Sri Lanka’s biggest single financier, accounting for about 40 per cent of some $2.03 billion in foreign money spent on infrastructure projects in 2013, according to the latest Central Bank of Sri Lanka report.

TAGS :  Beijing ,  China ,  India ,  Maithripala Sirisena ,  Xi Jinping ,
Disclaimer: All the comments will be moderated by the AD editorial. Abstain from posting comments that are obscene, defamatory or slanderous. Please avoid outside hyperlinks inside the comment and avoid typing all capitalized comments. Help us delete comments that do not follow these guidelines by flagging them(mouse over a comment and click the flag icon on the right side). Do use these forums to voice your opinions and create healthy discourse.