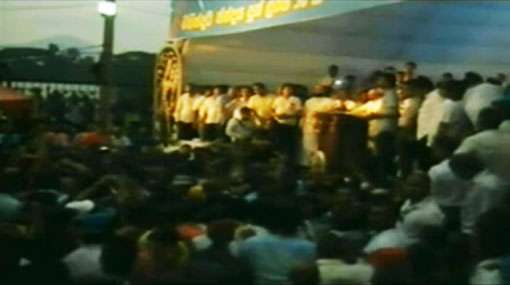 The public rally is the third in a series of events being organized by several coalition partners of the UPFA including the National Freedom Front (NFF), Mahajana Eksath Peramuna, Piwithuru Hela Urumaya and Democratic Left Front (DLF) supporting the former President.

Similar rallies held in Nugegoda and Kandy managed to draw large crowds with several politicians taking the stage to address the gatherings.

On March 03, the Central Committee of the Sri Lanka Freedom Party (SLFP) decided to prohibit its members from participating in public rallies organized by other political parties, without approval from the party.

TAGS :  SLFP ,  Mahinda Rajapaksa ,  Ratnapura rally ,  Dinesh Gunawardena ,  Wimal Weerawansa ,  Vasudewa Nanayakkara ,  Udaya Gammanpila ,
Disclaimer: All the comments will be moderated by the AD editorial. Abstain from posting comments that are obscene, defamatory or slanderous. Please avoid outside hyperlinks inside the comment and avoid typing all capitalized comments. Help us delete comments that do not follow these guidelines by flagging them(mouse over a comment and click the flag icon on the right side). Do use these forums to voice your opinions and create healthy discourse.