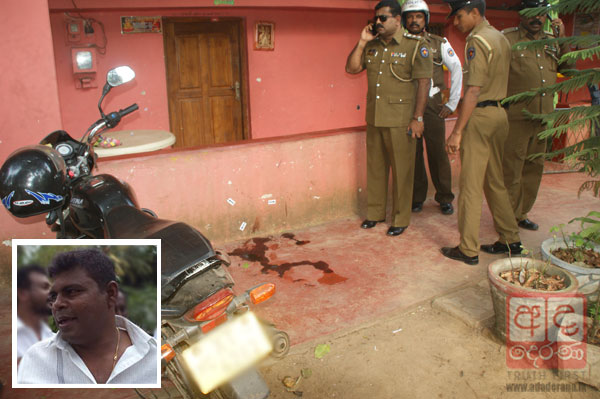 The scene of the crime in Hathare Ela, Bendiwewa. (Inset) Priyantha Sirisena a.k.a. Weli Raju.

The suspect arrested over the attack on President Maithripala Sirisena’s brother Priyantha, says he hid and waited before attacking the victim with an axe, because the latter had yelled at his parents.

Police said that during interrogations, the suspect revealed that the crime was committed in retribution as Priyantha had yelled at his parents using foul language.

Saputhanthri, 34, had stated that he hid and waited for Priyantha Sirisena, also known as Weli Raju, before attacking him with the axe to the back of the head, police said.

Meanwhile police have recovered the weapon used by the suspects from near the scene of the crime in Hathare Ela, Bendiwewa. Both the suspect and the axe are o be produced before the Polonnaruwa Court today.

Priyantha, who had suffered serious injuries from the attack, is currently receiving treatment in the ICU of a private hospital in Colombo while he has reportedly undergone surgery.

Police spokesman ASP Ruwan Gunasekara stated that a special investigation into the incident is ongoing, led by the Polonnaruwa Senior Superintendent of Police (SSP).

Three special police teams have been deployed to the scene of the crime last night in order to carry out investigations.

Priyantha Sirisena who was admitted to the Polonnaruwa Hospital following the alleged attack was airlifted to a private hospital in Colombo yesterday.

Priyantha, who is also known as “Weli Raju,” is a businessman predominantly engaged in sand mining.
He is a younger brother of President Sirisena, who is currently on a four-day state visit to China.

TAGS :  Priyantha Sirisena ,  Don Ishara Lakmal Saputhanthri ,  Weli Raju ,  Bakamuna Police ,  Polonnaruwa ,  ASP Ruwan Gunasekara ,
Disclaimer: All the comments will be moderated by the AD editorial. Abstain from posting comments that are obscene, defamatory or slanderous. Please avoid outside hyperlinks inside the comment and avoid typing all capitalized comments. Help us delete comments that do not follow these guidelines by flagging them(mouse over a comment and click the flag icon on the right side). Do use these forums to voice your opinions and create healthy discourse.