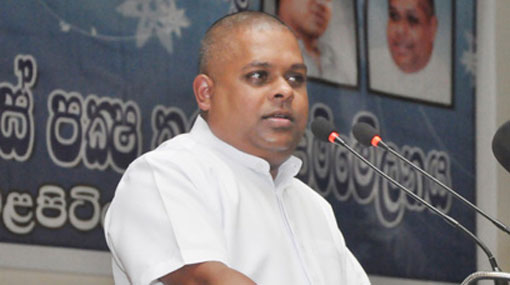 The Colombo Fort Magistrate on Tuesday (31) granted bail to MP Sajin de Vass Gunawardena on a case filed by the Bribery Commission over failure to declare his assets.

He was released on a Rs 50,000 cash bail and Rs 1 million personal bail while the UPFA Parliamentarian was also prohibited from leaving the country.

The case will taken up again on September 01.

On March 20, the Commission to Investigate Allegations of Bribery or Corruption filed the case against Mr Gunawardena under section 9 of the Declaration of Assets and Liabilities Law No. 1 on 1975.

Sri Lanka’s anti-corruption body has so far barred the Parliamentarian and former central bank governor Ajith Nivard Cabraal from leaving the country because of corruption complaints.

On January 22, the Bribery Commission issued a directive to the Department of Immigration and Emigration (DIE) to seize the passports of Mr Gunawardena and that of Mr Cabraal.

This came after the The Janatha Vimukthi Peramuna (JVP) lodged a complaint with the Bribery Commission against 12 former governmental members including former President Mahinda Rajapaksa.

Both have rejected allegations they misused public funds.

TAGS :  Sajin De Vass Gunawardena ,  CIABC ,  Bribery Commission ,  UPFA ,  Ajith Nivard Cabraal ,
Disclaimer: All the comments will be moderated by the AD editorial. Abstain from posting comments that are obscene, defamatory or slanderous. Please avoid outside hyperlinks inside the comment and avoid typing all capitalized comments. Help us delete comments that do not follow these guidelines by flagging them(mouse over a comment and click the flag icon on the right side). Do use these forums to voice your opinions and create healthy discourse.