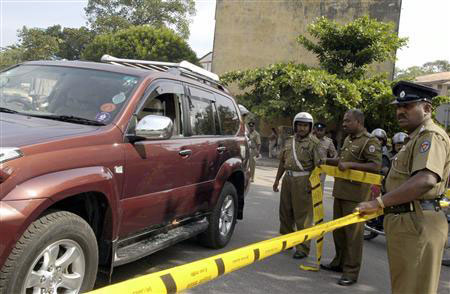 Police officers at the site where Tamil parliamentarian Nadarajah Raviraj was shot in Colombo on November 10, 2006. Photo: REUTERS

Three navy personnel have been detained and are being questioned by the Criminal Investigations Department (CID) over the killing of TNA MP Nadarajah Raviraj in 2006, the police spokesman said.

Two of them are no longer serving in the Sri Lanka Navy, ASP Ruwan Gunasekara said.

Raviraj, who represented the Tamil National Alliance (TNA) from Jaffna district, died in hospital after being shot by unidentified gunmen in Colombo on November 10, 2006.

He was shot as he left his house in Colombo for work. One of his guards, Sgt. Lakshman Lokuwella, was also killed in the attack.

Mr Raviraj, a former mayor of Jaffna and a lawyer by profession, had his own law firm: “Raviraj and Associates”. He was a native of Chavakachcheri in the Thenmaratchy sector of Jaffna.

His motivation and interest in politics led him to victory as a Councilor to the Jaffna Municipal Council in 1997.

As a community leader he articulated his views fearlessly particularly on the north east terrorist problem, though he and the TNA then sympathized with the Tamil Tigers (LTTE).

He was elected to the Parliament in the 2001 General Election for the first time representing Jaffna district and was re-elected in 2004.

TAGS :  Nadarajah Raviraj ,  CID ,  Sri Lanka Navy ,  Lakshman Lokuwella ,  Joseph Pararajasingham ,
Disclaimer: All the comments will be moderated by the AD editorial. Abstain from posting comments that are obscene, defamatory or slanderous. Please avoid outside hyperlinks inside the comment and avoid typing all capitalized comments. Help us delete comments that do not follow these guidelines by flagging them(mouse over a comment and click the flag icon on the right side). Do use these forums to voice your opinions and create healthy discourse.