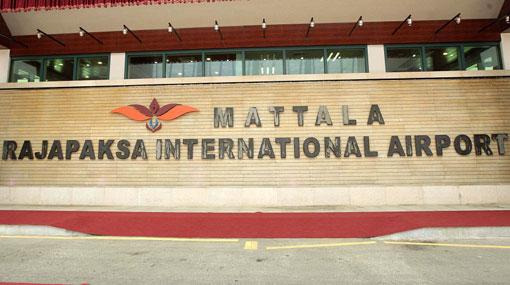 Eran Wickramaratne, the deputy minister of investment promotion, says the current government now has to figure out how sunken investments like the Mattala Rajapaksa International Airport (MRIA) can be salvaged, or if they can be at all.

“Whichever way you look at it, the business model in Hambantota won’t work, probably for at least the next decade,” he was quoted as saying by Al Jazeera.

“Development should happen around population centers. What Hambantota lacks is just that. The day I visited the airport there, I asked the sole immigration officer how many passports she’d stamped that day. She said, ‘One.’”

Immediately following Mahinda Rajapaksa’s defeat at the Presidential Polls, SriLankan Airlines terminated its service to Hambantota, leaving Flydubai, a low-cost carrier from the United Arab Emirates, as the sole operator.

And despite its new port and proximity to Sri Lanka’s most visited beaches and national parks, the persistent lack of passengers led most airlines to first reduce Hambantota flights to add-ons to regular Colombo services before eliminating the destination altogether.

Four weeks ago, management of the airport’s operations was shifted to Colombo, and the airport’s CEO, Derrick Karunaratne, was transferred there as the head communications officer for the national aviation authority. His post in Hambantota is now vacant. And while he was still ready to provide a vision of a rosy future for that airport, he admitted, “We just don’t have a destination here.”

“It’s like a chicken-and-egg problem. Airlines are waiting on development to happen here, but without them it is tougher for us. At this stage, if I’m an airline’s CEO, I’d be wondering how I’ll sell my seats,” he said.

The airport’s failure is not just a public-relations debacle and financial fiasco, but an environmental disaster, too. After activists succeeded in blocking plans to expand a nearby landing strip, the Rajapaksa government decided to use 5,000 acres of forested land in Mattala instead, about six miles away. A village outside Hambantota, it is home to at least 400 elephants, according to Prithiviraj Fernando, the chairman of the Centre for Conservation and Research.

“They bulldozed most of that land,” he said. “And with all the associated encroachment such as highways, we’ve lost more natural habitat than people like to consider.”

Last January, a Flydubai jet was forced to make an emergency landing after it collided with a flock of peacocks, the third such incident in the airport’s first year of operation.

Karunaratne, the former airport CEO, said proposals were being drawn up to make use of the airport’s relatively wild setting. “We’re aggressively looking for investors from Singapore and the Middle East; they have the money,” he said.

“We could make Hambantota a visa-free, duty-free destination, with a golf course, safari camps. It could be a family destination, it could explode, just see,” he was quoted as saying in the Al Jazeera report.

Fernando agreed that utilizing the airport to promote wildlife appreciation could be a way to offset, in a small way, the adverse impact of the construction, saying, “Maybe they could turn it into a wildlife viewing area — you’re almost guaranteed an elephant.”

TAGS :  MRIA ,  Mattala ,  Mahinda Rajapaksa ,  Eran Wickramaratne ,  Derrick Karunaratne ,  Prithiviraj Fernando ,
Disclaimer: All the comments will be moderated by the AD editorial. Abstain from posting comments that are obscene, defamatory or slanderous. Please avoid outside hyperlinks inside the comment and avoid typing all capitalized comments. Help us delete comments that do not follow these guidelines by flagging them(mouse over a comment and click the flag icon on the right side). Do use these forums to voice your opinions and create healthy discourse.