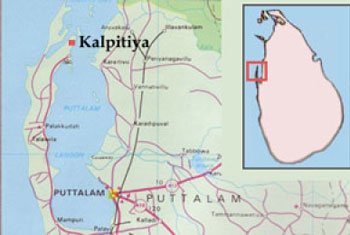 The Sri Lankan Government is planning to call for fresh tenders for 11 islands under the Kalpitiya development project. The islands according to the project are to be given on 30-99 year leases to the private sector. However, three out of 14 islands in Kalpitiya had been earlier given on lease to investors.

Fresh tenders will be called for the islands of Kalpitiya, Sri Lanka Tourism Development Authority (SLTDA) Director General Malraj Kiriella has told the Business Times adding that the authorities would be commencing work on the tender procedures to lease out the lands.

Prior to leasing out there was work to be carried out in term of development on infrastructure like water, electricity and transportation, he has said. Commenting on the fisher folk issues concerning their lands and deprivation of livelihoods, he has noted that these issues would be sorted out through an amicable settlement between both parties.

At present authorities are reviewing the entire project and are expected to come out with a plan on the implementation, leasing out and the models to be adopted on infrastructure development and ascertain the best and quickest way to go ahead with the project, the Govt. Information Department said today.

TAGS :  Kalpitiya ,  Sri Lanka Tourism ,
Disclaimer: All the comments will be moderated by the AD editorial. Abstain from posting comments that are obscene, defamatory or slanderous. Please avoid outside hyperlinks inside the comment and avoid typing all capitalized comments. Help us delete comments that do not follow these guidelines by flagging them(mouse over a comment and click the flag icon on the right side). Do use these forums to voice your opinions and create healthy discourse.