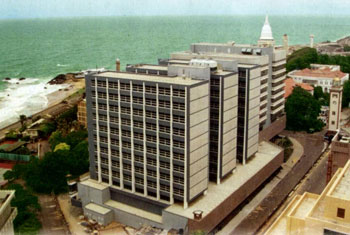 Sri Lanka’s government borrowing has risen sharply since January, central bank data showed on Monday, due to populist policies adopted by the new government as it seeks to consolidate its grip on power at a parliamentary election.

Having won a presidential election on Jan. 8, President Maithripala Sirisena appointed Ranil Wickramasinghe as prime minister, though he lacks a majority in the 225-seat parliament. Sirisena has pledged to hold parliamentary elections, which could take place before the end of June - a year ahead of schedule.

To win over voters, the new government’s sharply increased state sector wages and lower duties on key commodities, putting pressure on government finances, pushing yields on Treasury bills up by between 76 to 82 basis points (bps) since Jan. 7. The total outstanding stock of T-bills and T-bonds rose by 216.6 billion rupees ($1.63 billion) in the first three months of this year - equivalent to around 90 percent of the total net borrowing through T-bills and T-bonds in 2014.

The total outstanding dollar-denominated Sri Lanka Development Bonds (SLDB) jumped 18 percent in the first three months with the government borrowing a net 70 billion rupees worth SLDBs. Government spokesman Rajitha Senaratne told Reuters on Friday that the government needs to borrow more to pay contractors who took on debt in order to complete ambitious infrastructure projects during the previous administration’s tenure. Sirisena has ordered a review of all infrastructure projects under the previous government due to alleged corruption.

Market analysts said the pressure on government finances was also the consequence of a delay in a planned sovereign bond issue of up to $1.5 billion. Roadshows to test investor appetite found some fund managers were reluctant to buy the bond before the parliamentary election, according to analysts, though there were still some who favoured a eurobond issue this month, Reuters reports.

TAGS :  Central Bank ,  Ranil Wickremasinghe ,  Maithripala Sirisena ,
Disclaimer: All the comments will be moderated by the AD editorial. Abstain from posting comments that are obscene, defamatory or slanderous. Please avoid outside hyperlinks inside the comment and avoid typing all capitalized comments. Help us delete comments that do not follow these guidelines by flagging them(mouse over a comment and click the flag icon on the right side). Do use these forums to voice your opinions and create healthy discourse.