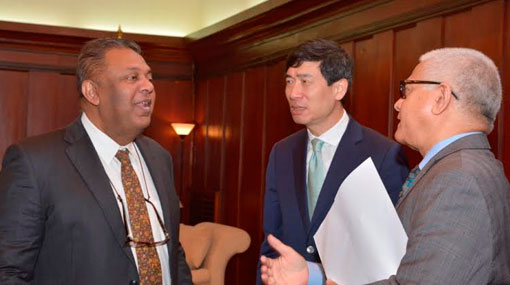 UN to back 100-day programme

“The UN system and UNDP in particular is pleased to continue to provide support to the 100 days programme, at the request of the Government,” UN Assistant Secretary-General and UNDP’s Asia-Pacific Regional Director Haoliang Xu has said.

The observation was made when Xu held discussions with the Minister of Foreign Affairs, Mangala Samaraweera, on Thursday (9).

During discussions Xu also thanked the Government of Sri Lanka for their continued support to the work of the UN Country Team in Sri Lanka.

He also congratulated Sri Lanka on marking this year which is the 60th anniversary since it became a Member State of the UN, coinciding with the 70th year since the UN was founded and acknowledged the partnership with the Ministry in launching the 70/60 campaign.

During the visit, which is his second visit to the island, Xu has met and exchanged views with high-level Government officials, development partners and the civil society on learning more about the emerging development needs and expectations of Sri Lanka in a new political environment whilst ascertaining the future direction of UNDP support along with other members of the UN family, in particular strengthening UNDP’s role as a key development partner in Sri Lanka.

Further, Xu also undertook a visit to North Central and Northern provinces, where he will meet with Government officials, representatives from Community Based Organizations and beneficiaries and gain a first-hand understanding of the development priorities in the districts and further support needs.

TAGS :  UN ,  Assistant Secretary-General ,   Xu ,  Haoliang ,  100 days programme ,  UNDP ,  Mangala ,
Disclaimer: All the comments will be moderated by the AD editorial. Abstain from posting comments that are obscene, defamatory or slanderous. Please avoid outside hyperlinks inside the comment and avoid typing all capitalized comments. Help us delete comments that do not follow these guidelines by flagging them(mouse over a comment and click the flag icon on the right side). Do use these forums to voice your opinions and create healthy discourse.