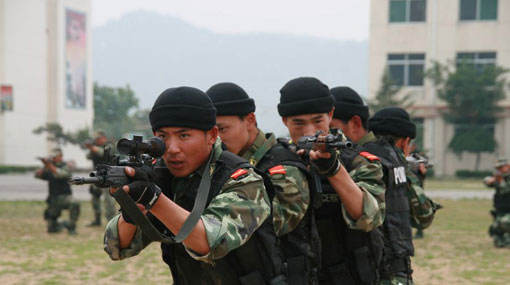 China and Sri Lanka have held a joint drill at a comprehensive military training base in southern China to enhance their capabilities, specially in combating terror.

The joint drill was aimed at helping both sides to learn from each other, so as to improve their capabilities of performing duties, the Chinese state-run Military Online News reported.

The focus of the drill held on March 29 was on developing anti-terrorist skills and tactical trainings.

The anti-terrorist skills highlight skills of shooting, capturing, and climbing.

The second phase of the drill between China and Sri Lanka is expected to be held in June this year.

China will send several special operation teams to Sri Lanka to take part in the second phase of the joint drill, the report said.

The new government headed by Maithripala Sirisena has kept the project under suspension over concerns relating to environmental clearance and heavy interests rates charged over the loans provided for the Chinese projects. - PTI

TAGS :  China ,  Sri Lanka ,  APF ,  Silk Road Cooperation - 2015 ,  Guangzhou ,  Sri Lankan Army ,  Maritime Silk Road ,
Disclaimer: All the comments will be moderated by the AD editorial. Abstain from posting comments that are obscene, defamatory or slanderous. Please avoid outside hyperlinks inside the comment and avoid typing all capitalized comments. Help us delete comments that do not follow these guidelines by flagging them(mouse over a comment and click the flag icon on the right side). Do use these forums to voice your opinions and create healthy discourse.