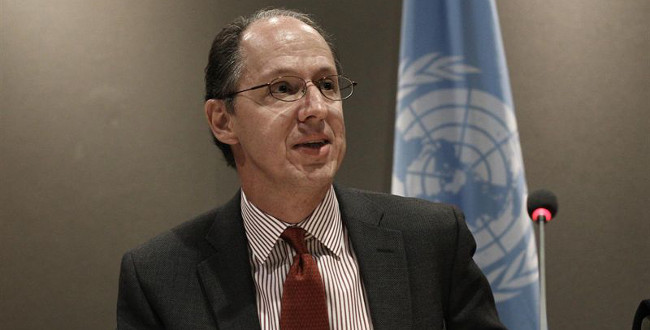 Sri Lanka has potential to be a role model: UN

“If handled well, the case of Sri Lanka has the potential to constitute an example for the region and for the world of how a sustainable peace ought to be achieved,” says Pablo de Greiff, UN Special Rapporteur on Truth, Justice, Reparations, and Guarantees of Non-recurrence.

Greiff who recently visited the island nation two weeks ago has also said that Sri Lankans have of late taken decisions that open the possibility of important progress in the protection of rights of all citizens and those decisions manifest the end of the country’s temporary leave from an international rights architecture that it contributed to construct.

“Most of the work necessary to redress violations and abuses, however, is still to be done. While long-term comprehensive policies are designed with the appropriate consultations, it is urgent to guarantee the cessation of all violations, and implement victim-assistance programmes.” he says.

Greiff further says “In the past, Sri Lanka has established numerous commissions of inquiry for mass violations. Some of these commissions have produced useful reports, including wide-ranging recommendations.

Others have produced reports that have never been made public. Failed, inadequate or uneven implementation of their recommendations has been a common feature. They have not contributed to closing the significant confidence gap between communities, to securing the rights of victims to truth, justice, reparation, and guarantees of non-recurrence, or to making State institutions more trustworthy in the eyes of citizens.

On the contrary, the accumulated result of these efforts has increased mistrust in the Government’s determination to genuinely redress those violations. At this critical juncture, the country cannot afford to simply reproduce an approach that is characterized by the proliferation of largely unrelated and inconsequential ‘ad hoc’ initiatives. Serious consideration needs to be given to establishing transitional justice mechanisms that contribute to building lasting institutions and capacities, and which allow for effective implementation.

Recently, ‘reconciliation’ has regained significant attention as the country is moving forward. In addition to inclusive political arrangements reconciliation calls for the creation of initiatives that satisfy legally binding rights to truth, justice, reparation, and guarantees of non-recurrence.

Far from being alternatives to one another, these initiatives are complementary elements of a reconciliation policy. Hence, there are no ‘shortcuts’ to reconciliation. Relying on some of the measures at the expense of others, requiring victims to ‘choose’ between measures while sacrificing others would be both legally unjustified and practically inconducive. For instance, conditioning ‘reparation’ benefits on the victims’ willingness to give up their rights to truth and justice would undermine their character as reparations.”

TAGS :  Sri Lanka ,  UN ,  Pablo de Greiff ,  war ,  war crimes ,
Disclaimer: All the comments will be moderated by the AD editorial. Abstain from posting comments that are obscene, defamatory or slanderous. Please avoid outside hyperlinks inside the comment and avoid typing all capitalized comments. Help us delete comments that do not follow these guidelines by flagging them(mouse over a comment and click the flag icon on the right side). Do use these forums to voice your opinions and create healthy discourse.