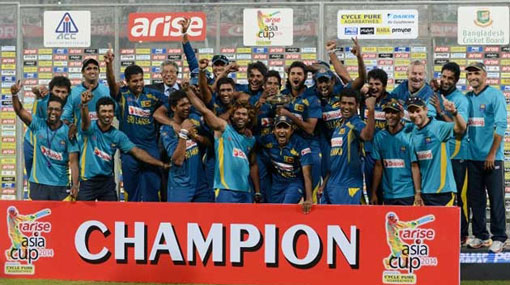 According to a report in the Pakistan Observer, its sources have revealed that the ACC headquarters will be shut down from June this year. “Only the two departments of the ACC - Finance and Tournament & Event management - will operate from Singapore”, the source said.

However, “the present coaching and game development staff will have an option to join the ICC,” the newspaper’s source further said without explaining further how that works out.

“Sultan Rana (Pakistan) and Thusith Perera (Sri Lanka) will work from a “flow office” in Singapore and rest of the staff, including the present CEO Ashraful Haq, who has gone to Dubai for the office work, will be jobless”, the source added.

“The future of the Asia Cup is now very much in doubt”, the source significantly revealed.

The twelfth edition of Asia Cup was held in Dhaka and Chittagong, Bangladesh from 25 February to 8 March 2014. Sri Lanka defeated Pakistan by 5 wickets in the final to win the Asia Cup for the fifth time.

TAGS :  ICC ,  ACC ,  Asia Cup ,  Sri Lanka Cricket ,  Ashraful Haq ,  Sultan Rana ,  Thusith Perera ,
Disclaimer: All the comments will be moderated by the AD editorial. Abstain from posting comments that are obscene, defamatory or slanderous. Please avoid outside hyperlinks inside the comment and avoid typing all capitalized comments. Help us delete comments that do not follow these guidelines by flagging them(mouse over a comment and click the flag icon on the right side). Do use these forums to voice your opinions and create healthy discourse.