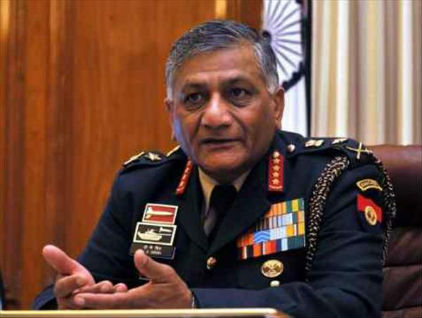 “The decision to deploy the IPKF in Sri Lanka was a high-level policy failure,” the former Army chief said at an event to discuss his autobiography titled ‘Courage and Conviction’ in Raipur on Tuesday.

“It was a policy failure that the Government of India and Sri Lanka had entered into an agreement, while the fight was between Liberation Tigers of Tamil Eelam (LTTE) and the Sri Lankan government. Neither there was control over the LTTE nor did they owe any responsibility,” he said.

“It was a policy failure and it was due to several reasons. You (Indian Army) went there for peace keeping but got entangled in the war,” he said.

The Union Minister claimed that during IPKF operations in Sri Lanka, Indian forces got several opportunities to nab LTTE supremo Velupillai Prabhakaran but every time there were “instructions”, which ensured him a safe passage.

Singh also claimed that at one point, none other than late Sri Lankan president Ranasinghe Premadasa had sought to help the LTTE fight the IPKF.

On improving ties between India and Pakistan, Singh said an initiative has been taken with the neighbouring nation, which has been asked to ensure a good atmosphere there.

“We have been expressing our concern to them (Pakistan). I believe that several things are hampering the development of Pakistan. Amidst all these things, they have to chalk out a solution. We can’t impose our own solution on them. We hope that they will deliberate on those issues about which we have expressed our concern,” he said.

He said that China has settled border issues with all its neighbouring countries, but not with India.

“Trouble erupted since the day China started calling Arunachal as ‘South Tibet’. China has settled its border disputes with all neighbouring countries, but not with India. The issue needs to be resolved. However, we can’t fix a time frame for that,” he said. - PTI

TAGS :  IPKF ,  VK Singh ,  India ,  General ,  LTTE ,  Velupillai Prabhakaran ,  Indian Army ,
Disclaimer: All the comments will be moderated by the AD editorial. Abstain from posting comments that are obscene, defamatory or slanderous. Please avoid outside hyperlinks inside the comment and avoid typing all capitalized comments. Help us delete comments that do not follow these guidelines by flagging them(mouse over a comment and click the flag icon on the right side). Do use these forums to voice your opinions and create healthy discourse.