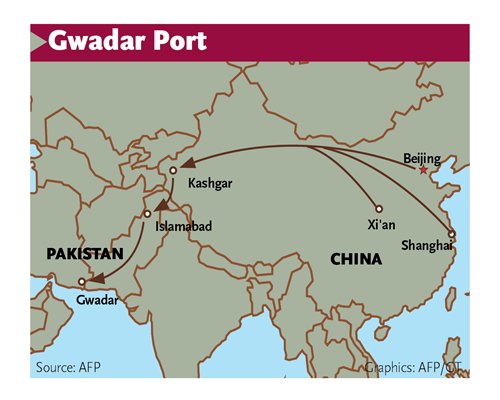 Chinese naval ships to use Gwadar port after Colombo snub

Pakistan’s Gwadar port which has been taken over by a Chinese firm could guarantee maintenance and supply for China’s naval ships in the Indian Ocean after the new Sri Lankan government declined permission for Chinese vessels to dock in the country.

“The Gwadar port will also guarantee China’s naval ships’ maintenance and supply in the Indian Ocean. The move is widely seen as crucial for China, especially as it is unlikely that Sri Lanka will open its ports to Chinese naval ships,” Zhao Gancheng, director of South Asia Studies at Shanghai Institute for International Studies told state-run Global Times.

Zhao said the port will serve as a major route to the Indian Ocean for Chinese goods, which will have far-reaching significance for China’s Xinjiang region’s economic development.

Xinjiang is planned to be connected through an economic corridor with Gwadar through Pakistan-occupied Kashmir (PoK).

Chinese experts however warned of inherent risks about the project in view of militancy in the Balochistan region.

Experts cautioned about obstacles as the port area suffers from a lack of water resources, housing, transportation and other facilities to provide for a large workforce, the Global Times reported.

Wang Dehua, an expert with the Shanghai Municipal Center for International Studies, who has been visiting Gwardar Port since 2007, said that detailed plans on building highways, railways and pipelines are the second step.

“Building such infrastructure has inherent risks and difficulties, he said, due to the high mountain ranges and security issues caused by militants operating in the region. These difficulties can be overcome, but may take time,” he said.

The port will formally commence operations by a Chinese company this month which is projected as a key transportation hub of the planned China-Pakistan Economic Corridor. - PTI

TAGS :  Gwadar ,  China ,  India ,  Sri Lanka ,  submarine ,  Zhao Gancheng ,  Shanghai Institutes for International Studies ,  PoK ,  Mahinda Rajapaksa ,  Maithripala Sirisena ,  Pakistan ,
Disclaimer: All the comments will be moderated by the AD editorial. Abstain from posting comments that are obscene, defamatory or slanderous. Please avoid outside hyperlinks inside the comment and avoid typing all capitalized comments. Help us delete comments that do not follow these guidelines by flagging them(mouse over a comment and click the flag icon on the right side). Do use these forums to voice your opinions and create healthy discourse.