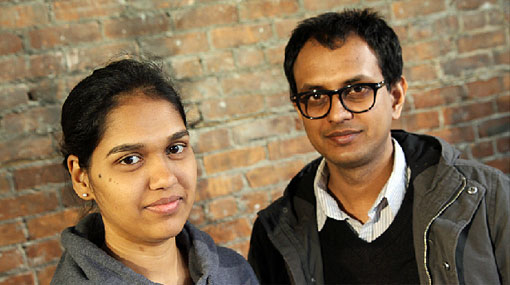 Charmini Peli Kankanamalage is terrified she stole something from her child.

It’s something intrinsic to every Sri Lankan, she says, but something most parents would never want for their children: war. That guilt and turmoil is the root of her new 15-minute docudrama called M’al d’archive that will premiere at the prestigious Cannes International Film Festival this year.

“If he doesn’t know these experiences of suffering, then he won’t be a true Sri Lankan,” said Kankanamalage, a PhD student at McMaster University in Canada. “To be a Sri Lankan is the war – because it has taken such a lot from our lives.”

Kankanamalage, a 32-year-old French master’s student, created the film to act as her thesis. This way, she could dissect her thoughts on leaving Sri Lanka, which was gripped by a bloody civil war for decades.

The thought that her now two-year-old son won’t know or connect with his homeland heavily weighs on her. One of the most poignant lines in the film is this message to her son: “You do not belong anywhere, like me, like your father. We are wanderers. Free.”

The film isn’t up for an award, but is being shown in the Cannes Short Film Corner, where fledgling filmmakers debut their work in front of a live audience.

Though the festival carries an obvious cache, M’al d’archive was filmed in a true guerilla filmmaking fashion. Her husband Kalinga Vithanage (who is a filmmaker in his own right) acted as the director of photography.

He calls it a “zero budget project” that was shot in two months, using a Canon 6D to shoot, whatever light was available, and an iPod to record the voiceover. Most everything was shot in their Hamilton home, once their toddler son fell asleep.

The birth footage in the film is their son’s actual birth, which Vithanage shot.

If nothing else, this film will act as an archive for her son, and a way for him to start exploring his roots when he’s older.

“I just want him to have the essence of his roots.”

TAGS :  Charmini Peli Kankanamalage ,  Kalinga Vithanage ,  PhD ,  Canada ,  war ,  Mal darchive ,
Disclaimer: All the comments will be moderated by the AD editorial. Abstain from posting comments that are obscene, defamatory or slanderous. Please avoid outside hyperlinks inside the comment and avoid typing all capitalized comments. Help us delete comments that do not follow these guidelines by flagging them(mouse over a comment and click the flag icon on the right side). Do use these forums to voice your opinions and create healthy discourse.