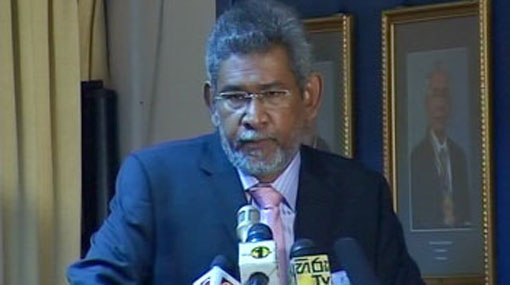 India unsuited to play mediator due to TN factor - Dayan

India is “structurally unsuited” to be mediator or facilitator in the Sri Lankan ethnic conflict because it is subject to the “emotional and electoral power” of one of its constituent states, namely, Tamil Nadu, argues former Sri Lankan envoy at the UN in Geneva, Dr. Dayan Jayatilleka.

“The emotional and electoral power of Tamil Nadu is an axiomatic factor in Indian decision making. This was so even during the IPKF operations when the prestige of the Indian state and its armed forces were at stake. Indian soldiers were dying horribly, with some necklaced with burning rubber tyres. Despite such horrific incidents, New Delhi yielded to Chennai’s demands and refrained from going the whole hog against the LTTE,” Jayatilleka told Express.

Alluding to the Maithripala Sirisena government’s tilt towards India, opening the door again to India’s intervention in solving the ethnic issue, Jayatilleka warned that Sri Lanka’s “strategic” dependence on India in matters of its destiny will not protect the island nation from “Tamil separatism and irredentism.”

He granted that India is a “good friend Sri Lanka’s” but that friendship has  “structural limitations’’, namely, New Delhi’s need to pander to Tamil Nadu.  The TN factor causes “unreliability and vacillation” on New Delhi’s part, which is seen by the Sinhalese majority in Lanka as a perceived tilt towards the Tamils. The Sinhalese majority does not consider India a “neutral umpire” and so, there is a backlash whenever India takes an active interest in the ethnic issue.

If Sri Lanka is to seek Third Party help to solve the ethnic question, “it should look for a country which would evenly represent all the belligerent communities, or it should be a regional coalition of countries which collectively neutralizes the profile of unevenness in the composition of any one state.”

India is not Sri Lanka’s “natural ally” Jayatilleka asserted. “Lanka’s natural allies must axiomatically be those powers which are not hamstrung by a Tamil nationalist factor within their societies,” he said.

In this context, Jayatilleka also ruled out the acceptability of certain Western nations which have an electorally important Lankan Tamil immigrant community to cater to.  - The New Indian Express

TAGS :  Dr. Dayan Jayatilleka ,  IPKF ,  India ,  Tamil Nadu ,  UN ,  Geneva ,  New Delhi ,  LTTE ,  Maithripala Sirisena ,
Disclaimer: All the comments will be moderated by the AD editorial. Abstain from posting comments that are obscene, defamatory or slanderous. Please avoid outside hyperlinks inside the comment and avoid typing all capitalized comments. Help us delete comments that do not follow these guidelines by flagging them(mouse over a comment and click the flag icon on the right side). Do use these forums to voice your opinions and create healthy discourse.