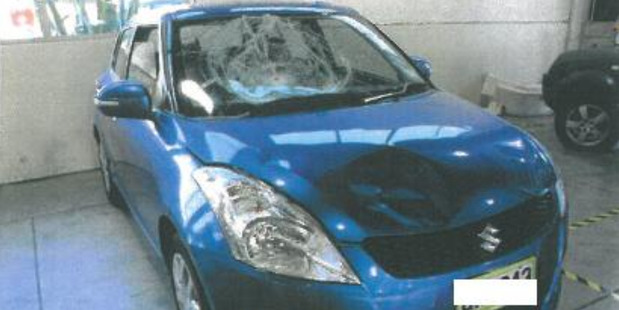 The rental car after the alleged hit-and-run.

A Sri Lankan man has allegedly hit a woman in the rental car he was driving then fled the scene in New Zealand, foreign media reported.

Viraj Goonasekera, 25, who is in New Zealand on a work permit, is charged with careless driving causing injury, making a false statement to police claiming a car had been willfully damaged and failing to stop and help after an accident.

Earlier this month, police released photos of a blue Suzuki Swift that had been returned to a vehicle rental company bearing a large dent in the bonnet and a damaged windscreen.

Forensic examination of the car revealed that the vehicle had hit a person, who was expected to have a head injury, and police subsequently contacted the driver.

Goonasekera appeared in Auckland District Court on Wednesday and was given interim name suppression because of his parents’ ill health, NZ Herald reported.

Community Magistrate Janet Holmes gave him two days to produce documentary evidence to prove it but he came to court today empty-handed.

Goonasekera’s lawyer Sam Fernando said his client’s parents knew about the charge and it was his work for a hotel that was the issue.

“The employer will probably take the attitude they can terminate his employment,” Mr Fernando said.

But Ms Holmes said there was no evidence that was the case and declined the application for continued suppression.

The victim of the alleged hit and run, Michele Foster-Chambers, was walking to meet a friend in Avondale when she crossed Great North Rd on March 29 when the alleged incident happened.

She told the New Zealand Herald she could not remember much about the collision but believed the car hit her legs, throwing her over the bonnet, and smashing her head into the windscreen before she landed on the road.

Slipping in and out of consciousness, Ms Foster-Chambers said she dragged herself to the side of the road where she was eventually picked up by a good Samaritan and taken home.

Goonasekera was remanded on bail after surrendering his passport.

He will be back in court to enter pleas to the charges next month, the report said.

TAGS :  hit-and-run ,  Viraj Goonasekera ,  New Zealand ,  accident ,  Auckland District Court ,
Disclaimer: All the comments will be moderated by the AD editorial. Abstain from posting comments that are obscene, defamatory or slanderous. Please avoid outside hyperlinks inside the comment and avoid typing all capitalized comments. Help us delete comments that do not follow these guidelines by flagging them(mouse over a comment and click the flag icon on the right side). Do use these forums to voice your opinions and create healthy discourse.