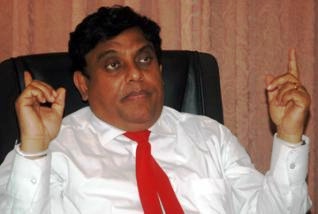 Former President Mahinda Rajapaksa is likely not moving to a house which was offered to him by Sri Lanka Labour Party Leader A.S.P. Liyanage, Ada Derana learns.

This came after Liyanage had been not available to discuss the matter since last Wednesday (15) though he agreed to offer the house in the first place, a source close to the former President said.

Rohan Weliwita, Media Coordinator of the former President said that Rajapaksa was expected to shift into the house in Diyawanna Oya at Rajagiriya on Monday (20).

“We tried our best to contact Liyanage. But he was not available. We thought Liyanage has gone missing and no one knows his whereabouts,” Weliwita told Ada Derana.

Earlier, Liyanage said that he offers his bungalow “Peacock” to the former President in a bid to show his gratitude for Rajapaksa’s contribution to war victory.

“I haven’t gone missing. I had been not responding to media, or else there were no other issues,” Liyanage said when contacted by Ada Derana.

He added his arrangement to offer his ‘Peacock’ bungalow to the former President was not succeeded since Rajapaksa did not respond to an agreement letter with respect to the ‘return policy’ of the house.

“I was on the view that the former President should return the house after two years. But he did not respond. I have also been summoned to appear at the Colombo Crime Division today at 2.00 pm,” Liyanage said. He added that he lives in fear these days.

However, former President Rajapaksa speaking to Ada Derana at the Abhayaranya Temple in Colombo on Monday (20) asserted that he had no intention to reside at the house, however, he received Liyanage’s invitation.

TAGS :  A.S.P. Liyanage ,  Sri Lanka Labour Party ,  Rohan Weliwita ,  Mahinda Rajapaksa ,
Disclaimer: All the comments will be moderated by the AD editorial. Abstain from posting comments that are obscene, defamatory or slanderous. Please avoid outside hyperlinks inside the comment and avoid typing all capitalized comments. Help us delete comments that do not follow these guidelines by flagging them(mouse over a comment and click the flag icon on the right side). Do use these forums to voice your opinions and create healthy discourse.