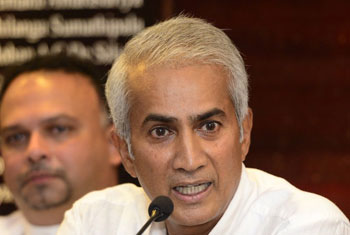 Sri Lanka`s cricket board Monday accused the world governing body of “gravely” disrupting the sport in the island by withholding its share of proceeds from World Cup tournaments.

The International Cricket Council (ICC) said last week it was withholding Sri Lanka`s share from the 2014 T20 World Cup and 2015 World Cup after the Colombo government dispensed with elections and appointed a local governing body.

Sports Minister Navin Dissanayake had sacked the previous board and appointed a nine-member panel headed by respected Test player Sidath Wettimuny to “clean up” corruption at Sri Lanka Cricket (SLC).

The new SLC management in a letter to David Richardson, the Chief Executive of ICC, said they were “shocked” by the ICC decision and expected monies due to them will be released without further delay.

“We would point out that these are monies which were due and payable by ICC to SLC from long prior to the appointment of the interim committee,” said the letter, a copy of which was released to reporters.

“Further, these are monies which are payable by ICC to SLC, irrespective of the body which is managing SLC for the time being.”

It said the ICC was told of the national board`s decision to appoint an interim committee to address corruption on April 2.

It did not say how much was due to it from the ICC, but sources close to cricket administration said the amount was about $11 million.

The ICC had said the minister`s action in naming an interim panel was a breach of its constitution, which requires free and fair elections of office-bearers at a member board.

The constitution states that “where a government interferes in the administration of cricket by a member, the executive board shall have the power to suspend or refuse to recognise that member,” AFP reports.

TAGS :  SLC ,  ICC ,  Interim Committee ,
Disclaimer: All the comments will be moderated by the AD editorial. Abstain from posting comments that are obscene, defamatory or slanderous. Please avoid outside hyperlinks inside the comment and avoid typing all capitalized comments. Help us delete comments that do not follow these guidelines by flagging them(mouse over a comment and click the flag icon on the right side). Do use these forums to voice your opinions and create healthy discourse.