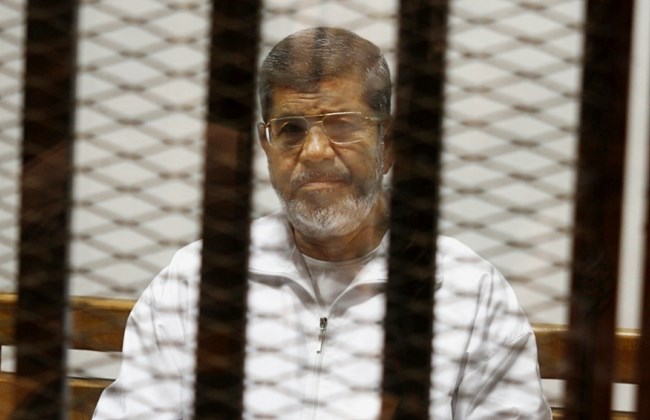 An Egyptian criminal court on Tuesday sentenced ousted Islamist President Mohammad Morsi to 20 years in prison over the killing of protesters in 2012, the first verdict to be issued against the country’s first freely elected leader.

The Cairo Criminal Court issued the verdict as Morsi and other defendants in the case - mostly Muslim Brotherhood leaders - stood in a soundproof glass cage inside a makeshift courtroom at Egypt’s national police academy.

The case stems from violence outside the presidential palace in December 2012. Morsi’s supporters attacked opposition protesters, sparking clashes that killed at least 10 people.

Judge Ahmed Youssef dropped murder charges and said the sentence was linked to the “show of force” and unlawful detention associated with the case.

In addition to Morsi, 12 Brotherhood leaders and Islamist supporters, including Mohammad el-Beltagy and Essam el-Erian, also were sentenced to 20 years in prison.

Morsi and the rest of the defendants raised the four-finger sign symbolizing the sit-in at the Rabaah al-Adawiya mosque, where hundreds were killed when security forces violently dispersed the sprawling sit-in by Morsi’s supporters on Aug. 14, 2013.

TAGS :  Egyptian ,  President ,  Mohammad Morsi ,
Disclaimer: All the comments will be moderated by the AD editorial. Abstain from posting comments that are obscene, defamatory or slanderous. Please avoid outside hyperlinks inside the comment and avoid typing all capitalized comments. Help us delete comments that do not follow these guidelines by flagging them(mouse over a comment and click the flag icon on the right side). Do use these forums to voice your opinions and create healthy discourse.