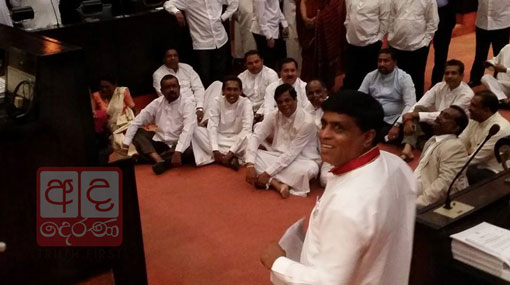 Opposition lawmaker Bandula Gunawardane told parliament the director general of the Commission to Investigate Allegations of Bribery or Corruption, Dilrukshi Wickramasinghe, should be dismissed for her “arbitrary action”.

Wickramasinghe has summoned Rajapaks to appear on Friday following a complaint that he paid a bribe of more than 600mn rupees ($4.6mn) to a lawmaker from the then-opposition to defect ahead of the presidential election in January.

“Today, 113 lawmakers signed a petition asking the speaker to take action to remove Dilrukshi Wickramasinghe,” said Gunawardane, who is from Rajapakse’s faction.

New President Maithripala Sirisena has launched a series of corruption investigations against Rajapaksa’s inner circle since ousting him at the election after a decade in power. (AFP)

TAGS :  Mahinda Rajapaksa ,  bribery allegations ,  bribery ,  allegations ,  Bandula Gunawardane ,  Dilrukshi Wickramasinghe ,
Disclaimer: All the comments will be moderated by the AD editorial. Abstain from posting comments that are obscene, defamatory or slanderous. Please avoid outside hyperlinks inside the comment and avoid typing all capitalized comments. Help us delete comments that do not follow these guidelines by flagging them(mouse over a comment and click the flag icon on the right side). Do use these forums to voice your opinions and create healthy discourse.