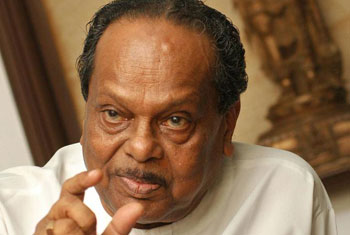 TULF wants Bill of Rights introduced with 19A

Leader of the Tamil United Liberation Front (TULF), V. Anandasangaree, today called for the adoption the Bill of Rights alongside the 19th Amendment to the Constitution.

“What is happening in the country today is thoroughly disappointing,” he said in a statement issued today.

“I am frankly of the opinion that neither the 19th amendment nor the 20th amendment will get passed or even reach the point of debating, as now rescheduled for the 27th  and 28th of this month.”

The former MP said that the creation of this prevailing situation will amount to “total betrayal” of the trust the Sri Lankan people had placed on their leaders. “Whether we like it or not we all know that the people very much desire a change.”

“Nothing will be lost if the country will pay attention to my suggestion to introduce the Bill of Rights in toto, as found in the South Africans constitution,” he said.

The TULF leader stated that there is no guarantee that a similar situation will not arise again to compel for the postponement of the debate for a future date.

He said that South Africans consider the Bill of Rights as the cornerstone of democracy enshrining the Rights of all people in their country and affirming the democratic values of human dignity equality and freedom.

“It will be the duty of the state to respect, protect, promote and fulfill the rights in the Bill of Rights.”

Mr Anandasangaree further charged that he is being “ignored” by the leaders of the newly formed National Government, who he says should have consulted him at least on crucial matters that concern the state.

TAGS :  V. Anandasangaree ,  TULF ,  Bill of Rights ,  19th Amendment ,  20th Amendment ,  South Africa ,
Disclaimer: All the comments will be moderated by the AD editorial. Abstain from posting comments that are obscene, defamatory or slanderous. Please avoid outside hyperlinks inside the comment and avoid typing all capitalized comments. Help us delete comments that do not follow these guidelines by flagging them(mouse over a comment and click the flag icon on the right side). Do use these forums to voice your opinions and create healthy discourse.