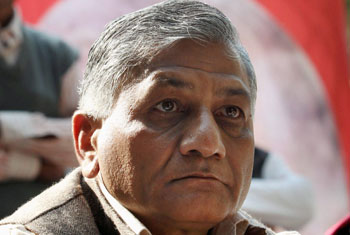 The Indian government did not get any complaint against Sri Lankan navy allegedly hurling petrol bombs at Indian fishermen, the Minister of State for External Affairs V K Singh informed the Rajya Sabha.

The written reply by the Minister of State was a direct contradiction of reports in media in Tamil Nadu, which quoted police sources as saying that Sri Lankan naval personnel had tossed petrol bombs on fishermen last month.

“As per records available with the Government, no complaint has been received regarding alleged incident of petrol bomb attack on Indian fishermen by Sri Lankan Navy on March 11, 2015,” Singh said.

He added that whenever reports of any attack were brought to the government’s notice, they had “consistently taken up the issue with the Government of Sri Lanka to ensure that Sri Lankan authorities acted with restraint and our fishermen were treated in a humane manner.”

Replying to another question, Singh said India had immediately taken up the matter of 54 Indian fishermen who were taken into custody on March 21 by the Lankan navy.

“As a result of the Government’s steadfast efforts, all the fifty four Indian Fishermen were released by the Sri Lankan side and have since then been repatriated to India,” the Minister of State said.

On the repatriation of boats, Singh noted that 38 boats had been salvaged last month, out of the 87 boats detained by Sri Lanka since June 2014.

“Salvage of 30 more boats will be undertaken by Indian trawler owners in consultation with Government of Sri Lanka,” added the minister. Of the rest, 15 boats were completely damaged and likely to be abandoned, one abandoned by the salvage team and three boats sank at an early stage. – Express News Service

TAGS :  VK Singh ,  Indian fishermen ,  Rajya Sabha ,  India ,  Sri Lanka Navy ,
Disclaimer: All the comments will be moderated by the AD editorial. Abstain from posting comments that are obscene, defamatory or slanderous. Please avoid outside hyperlinks inside the comment and avoid typing all capitalized comments. Help us delete comments that do not follow these guidelines by flagging them(mouse over a comment and click the flag icon on the right side). Do use these forums to voice your opinions and create healthy discourse.