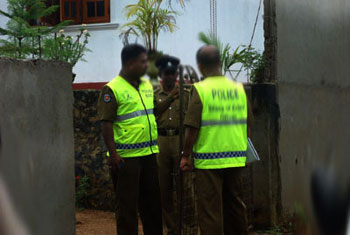 A woman has allegedly murdered her husband in the Kibissa area in Sigiriya this morning.

Police said that the victim was asleep at home when his wife attacked him with a hexagonal crowbar (Alawanguwa).

The 43-year-old father of two was admitted to the Kibissa Hospital in critical condition, however succumbed to injuries shortly after.

The victim’s 33-year-old wife has been arrested in connection with the murder while Sigiriya Police are conducting further investigations.

TAGS :  Mariticide ,  crowbar ,  murder ,  Siriya ,  Kibissa ,
Disclaimer: All the comments will be moderated by the AD editorial. Abstain from posting comments that are obscene, defamatory or slanderous. Please avoid outside hyperlinks inside the comment and avoid typing all capitalized comments. Help us delete comments that do not follow these guidelines by flagging them(mouse over a comment and click the flag icon on the right side). Do use these forums to voice your opinions and create healthy discourse.