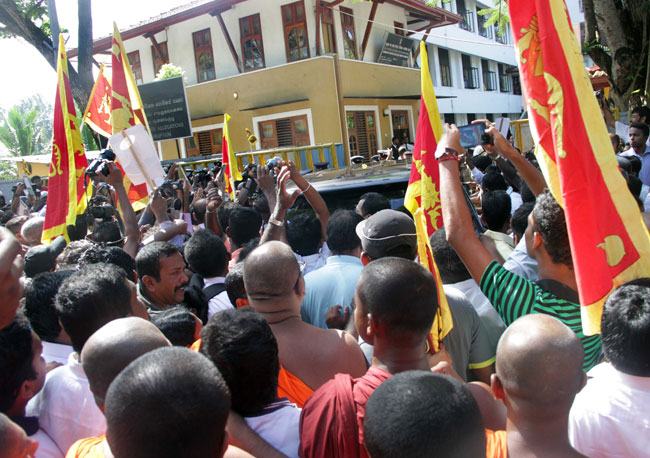 The distorted national flags on display during the protest on Thursday (April 23). Photo: Sanjeewa Lasantha

The General Secretary of the Pivithuru Hela Urumaya, Udaya Gammanpila, today expressed regret over the presence of several distorted national flags during a protest staged yesterday opposite the Bribery Commission.

The protest was organized, by the PHU and certain members of the UPFA, against the summoning of former Defence Secretary Gotabaya Rajapaksa for questioning pertaining to certain financial irregularities in Sri Lanka’s state-run budget carrier Mihin Lanka.

The stir was carried out despite a court order issued the previous day banning any form of protest in front of the Bribery Commission while the strong presence of several distorted national flags, in the hands of supporters as well as prominent politicians, had stirred controversy.

Mr Gammanpila says that the flags in question were brought to the demonstration by a certain group and that smaller versions of the same flag had circulated among supporters.

The Western Provincial Council member conceded that at one point even he was holding one of the distorted national flags.

In a statement issued today, the former legal advisor to the Jathika Hela Urumaya (JHU) stated that he sincerely believed the flag in his hand was the actual national flag of Sri Lanka.

Gammanpila stated that while the organisers cannot take full responsibility for the individuals who attend a protest staged at a public location and publicized through media, he regrets that an inaccurate national flag was brandished at a protest led by him.

Meanwhile UPFA Parliamentarian Dullas Alahapperuma, who was also present at the demonstration, has tendered his apology over the distorted flag fiasco, at a press conference held in Colombo today.

TAGS :  Udaya Gammanpila ,  Dullas Alahapperuma ,  Gotabaya Rajapaksa ,  JHU ,  PHU ,  Bribery Commission ,  Mihin Lanka ,  national flag ,
Disclaimer: All the comments will be moderated by the AD editorial. Abstain from posting comments that are obscene, defamatory or slanderous. Please avoid outside hyperlinks inside the comment and avoid typing all capitalized comments. Help us delete comments that do not follow these guidelines by flagging them(mouse over a comment and click the flag icon on the right side). Do use these forums to voice your opinions and create healthy discourse.