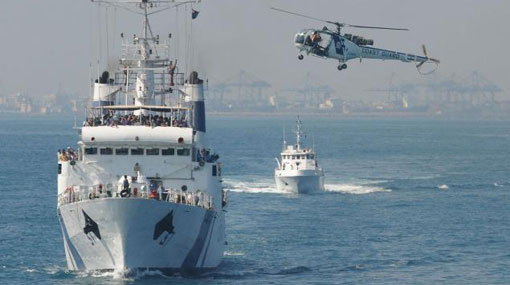 In a stand that may not go down well in Tamil Nadu, Indian Coast Guard on Monday told the Madras High Court that Indian fishermen allegedly indulge in various illegal acts such as smuggling and trawling in Sri Lankan waters resulting in action by the island nation’s navy.

The ICG submitted that it cannot take responsibility for the security of the fishermen if they entered Sri Lankan waters and there was confrontation between them and the Lankan Navy.

A counter-affidavit to this effect was filed by Indian Coast Guard (ICG) Deputy Director General, KR Nautial on a contempt petition against officials for not “obeying” the earlier court orders on providing security for fishermen.

The stand may not go down well in the state where the island nation comes under flak from politicians and government for mid-sea ‘attacks’ and arrests of the state’s fishermen.

The affidavit said the Indian fishermen had never been attacked in Indian waters and that neither the Coast Guard nor Navy permitted any of the Sri Lankan vessels to come to Indian territory.

“After the culmination of civil war (in Sri Lanka in 2009), it is reported that Indian fishermen are resorting to smuggling contraband including drugs due to the developing relationship with their counterparts in Sri Lanka and better monetary returns for such practices,” the affidavit said.

“They were also using banned methods of fishing, using high power motors, causing damage to Sri Lankan fishing gear and caught in the act of smuggling contraband and other unlawful activities like mid-sea attack between Indian fishermen and their counterparts,” the coast guard said.

This led to action by the Sri Lankan navalmen. During 2014 and up to March, 2015, a total of 185 boats had been impounded and action taken against 937 crew, it said. Similarly, the Sri Lankan Navy had reported to the Indian High Commission 36,865 instances of Indian fishermen poaching in the island waters.

The ICG had provided 280 distress alert transmitters besides giving emergency numbers to the fishermen, it said adding, however, they did not call the Coast Guard or navy in distress. Petitioner S M Ananthamurugan sought contempt action against the Union Cabinet Secretary and others for not obeying earlier court orders in providing security for the fishermen. - PTI

TAGS :  ICG ,  Sri Lanka Navy ,  Indian fishermen ,  KR Nautial ,  IMBL ,  India ,
Disclaimer: All the comments will be moderated by the AD editorial. Abstain from posting comments that are obscene, defamatory or slanderous. Please avoid outside hyperlinks inside the comment and avoid typing all capitalized comments. Help us delete comments that do not follow these guidelines by flagging them(mouse over a comment and click the flag icon on the right side). Do use these forums to voice your opinions and create healthy discourse.