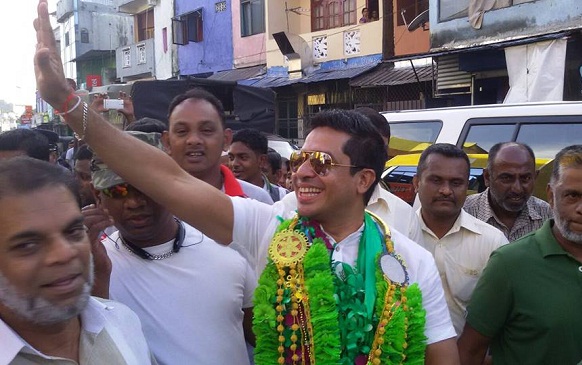 I never interfered to secure the release of an impounded container: Senasinghe

Deputy Justice Minister Sujeewa Senasinghe on Tuesday (28) dismisses allegations that he interfered to customs affairs in a bid to secure the release of an impounded container of copper rods, thus, he would instigate legal action against a print media institution that published an article to sling mud at him.

He said that the article published by a Sunday newspaper has caused disrepute to him and his family.

The article alleged that customs officials had to thwart an attempt by the Deputy Minister to secure the release of an impounded container of copper rods worth millions of rupees.

The article also quoted a top custom officer as saying that the copper rods were imported by a local company under the Temporary Import for Export Processing (TIEP) scheme and items imported under this scheme with duty-free concessions cannot be sold in Sri Lanka.

TAGS :  Sujeewa Senasinghe ,  customs ,  affairs ,  impounded ,  container ,  copper ,
Disclaimer: All the comments will be moderated by the AD editorial. Abstain from posting comments that are obscene, defamatory or slanderous. Please avoid outside hyperlinks inside the comment and avoid typing all capitalized comments. Help us delete comments that do not follow these guidelines by flagging them(mouse over a comment and click the flag icon on the right side). Do use these forums to voice your opinions and create healthy discourse.