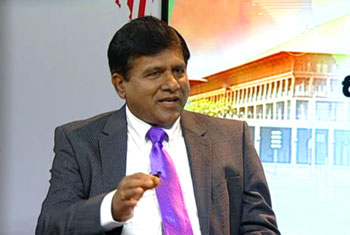 Minister of Justice Wijedasa Rajapaksa says that not a single positive proposal brought forward by opposition parliamentary groups with regard to the 19th amendment were discarded by the government, despite the raising of baseless and childish arguments at various points.

Parliament on Tuesday voted overwhelmingly to pass the 19th amendment to the constitution, in the biggest moderation of the system introduced 37 years ago.

The bill needed two-thirds of the votes in the 225-member Parliament and 212 lawmakers voted in its favor with only one voting against. One lawmaker abstained and 10 others were absent.

Mr Rajapaksa termed that accomplishment as a miracle, given the fact that the United National Party (UNP) has only 41 representatives in Parliament and even with the 7 MPs from the Sri Lanka Freedom Party who initially defected with Maithripala Sirisena.

Speaking during an exclusive interview with Ada Derana 24X7 today, the minister said that what they achieved was not the abolishing of executive powers but the changing of the establishment structure in executing those power, which extend from the President to Grama Sevaka officers.

Accordingly the powers previously vested with the President have now been transferred to the Cabinet of Ministers led by the Prime Minister and independent commissions.

The government yesterday ran into opposition from UPFA and other members of parliament over a plan to appoint a majority of independent members to a constitutional council, which in turn will re-establish the independent commissions to oversee various areas of governance.

Wijedasa Rajapaksa stated that he had expected an even worse outcome such as the sabotaging of the entire measure.

He stated that according to the 19th amendment, the President would not be a puppet or a fiend and that he would ensure democracy by functioning as an intermediate.

TAGS :  Wijedasa Rajapaksa ,  Maithripala Sirisena ,  19th Amendment ,  executive presidency ,  UNP ,  UPFA ,  Parliament ,  constitutional council ,
Disclaimer: All the comments will be moderated by the AD editorial. Abstain from posting comments that are obscene, defamatory or slanderous. Please avoid outside hyperlinks inside the comment and avoid typing all capitalized comments. Help us delete comments that do not follow these guidelines by flagging them(mouse over a comment and click the flag icon on the right side). Do use these forums to voice your opinions and create healthy discourse.