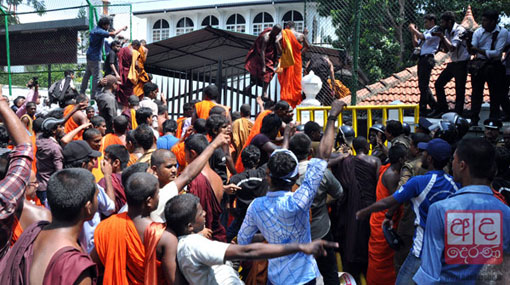 The protest outside the UGC takes a violent turn on Wednesday (29). Photo: Shan Fernando

Two university students arrested on charges of causing damage to public property during a protest opposite the UGC yesterday have been remanded until May 11, police said.

The protest march organized by the Inter-University Bhikku Front reached the University Grants Commission (UGC) at around 2.00pm yesterday.

It was reported that public property had been damaged during the stir.

TAGS :  UGC ,  Inter-University Bhikku Front ,  protest ,  arrested ,  damaging public property ,  remanded ,
Disclaimer: All the comments will be moderated by the AD editorial. Abstain from posting comments that are obscene, defamatory or slanderous. Please avoid outside hyperlinks inside the comment and avoid typing all capitalized comments. Help us delete comments that do not follow these guidelines by flagging them(mouse over a comment and click the flag icon on the right side). Do use these forums to voice your opinions and create healthy discourse.