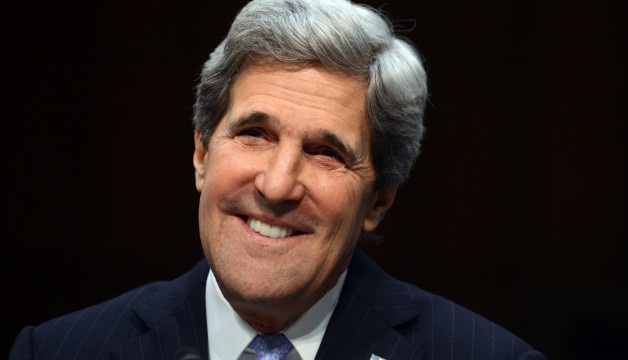 U.S. Secretary of State John Kerry arrived in Sri Lanka on Saturday to offer support for newly elected President Maithripala Sirisena after years of tensions with the former government of President Mahinda Rajapaksa over human rights.

It is the first time in a decade that a U.S. secretary of state has visited Sri Lanka.

Sirisena unseated Rajapaksa, one of the country’s most powerful leaders, in a surprise election victory in January with the support of the minority Tamils and Muslims. It ended a decade of rule that critics say had become increasingly authoritarian and marred by nepotism and corruption.

In recent years Sri Lanka had tilted heavily toward China as Rajapaksa fell out with the West over human rights and allegations of war crimes at the end of its drawn-out conflict with Tamil separatists, which ended in 2009.

Kerry has been credited in Sri Lanka for his role in pressing for peaceful and inclusive elections, and for calling Rajapaksa on the eve of voting to urge him to respect the outcome.

A senior State Department official, who briefed reporters on the visit, said Kerry’s visit would focus on early efforts by Sirisena to advance democracy and human rights, tackle corruption, and launch a process of national reconciliation.

He will also discuss U.S. interest in expanding trade and investment with Sri Lanka, the official said. The country exports roughly $2.5 billion in goods to the United States a year.

“A lot has to do with conditions on the ground and policies undertaken by the Sri Lanka government,” the official added.

The official said Washington was “encouraged” by the new government’s cooperation with the United Nations over a U.N. report on possible war atrocities during the final stages of the country’s civil war.

The U.N. said Rajapaksa’s government had failed to properly investigate war crimes. In February, at the request of Sirisena’s government, the U.N. Human Rights Council agreed to delay the release of the U.N. report until September.

While Sirisena appears to be more wiling to work with the U.N., his government has said it wants to conduct the war crimes investigation with assistance from the U.N.

“It’s a real opening in terms of Sri Lanka’s relations with the international community and with the United Nations,” the State Department official said of the cooperation with the U.N., adding: “We’ll have to see where this goes with Sri Lanka and its dialogue with the U.N.”

John Sifton, Asia Advocacy Director at Human Rights Watch, said Kerry should offer support and encouragement during the visit but not give the new government a seal of approval.

There were signs that the government was trying to set up a purely domestic mechanism to deal with war crimes despite assurances of international oversight, Sifton said.

“Kerry needs to tell Sri Lanka now that if they go down this purely domestic approach to the massive past crimes, the U.S.-Sri Lanka honeymoon is going to sour,” he added. (Reuters)