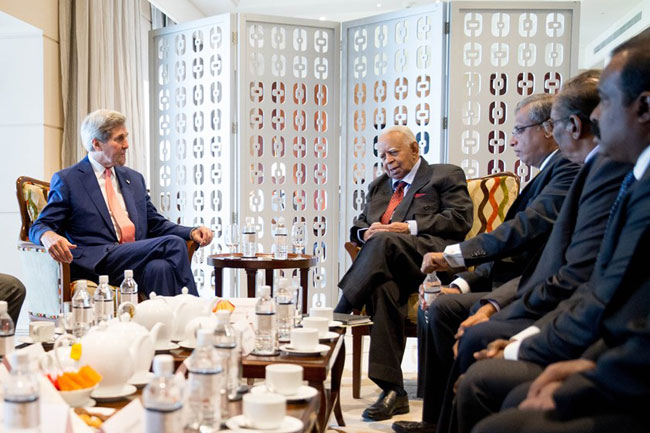 “He [Kerry] said he will do his best to support us to resolve outstanding issues,” TNA lawmaker Suresh Premachandran told AFP after their 30-minute meeting at Kerry’s hotel in the capital Colombo.

“They [U.S.] will also keep pushing for reconciliation, justice and accountability,” he added, referring to alleged war crimes committed by government forces in the final stages of the conflict that ended in May 2009.

On Saturday Kerry, whose presence in Colombo marked the island’s return to the diplomatic fold, heaped praise on the new administration of Sirisena, who toppled strongman Mahinda Rajapakse at January elections.

The diplomat pledged support to ensure “true reconciliation” in Sri Lanka six years after the end of its 37-year Tamil separatist war which claimed at least 100,000 lives.

He echoed a longstanding Tamil demand to investigate the cases of thousands who went missing towards the end of the conflict.

“Try to find wherever the truth may lead. No matter how painful that truth is,” Kerry said. “It’s the right and the humane thing to do - and it is, believe it or not, an essential part of the healing process.”

Sirisena’s administration has promised to investigate allegations human rights violations during the war.

Kerry has promised technical assistance for any probe and also urged Sirisena to free hundreds of Tamils who are still being held without any charges against them.

Meanwhile The Hindu reports that Kerry impressed upon the leaders of the Tamil National Alliance (TNA) the need to work together “in the interest of the country [Sri Lanka].”

Giving an account of the meeting between the Secretary of State and the TNA leaders, R. Sampanthan, who headed a six-member delegation, told The Hindu that Mr Kerry also expressed solidarity with the TNA.

Terming the meeting as “positive,” the parliamentary group leader said his team discussed immediate concerns and future needs of the political settlement with Mr Kerry.

The delegation included Mavai S. Senathirajah, deputy leader of the parliamentary group of the TNA, C.V. Vigneswaran, Chief Minister of the Northern Province and M.A. Sumanthiran.

TAGS :  US ,  Sri Lanka ,  John Kerry ,  Maithripala Sirisena ,  TNA ,  Sri Lankan Tamils ,  Suresh Premachandran ,  R. Sampanthan ,
Disclaimer: All the comments will be moderated by the AD editorial. Abstain from posting comments that are obscene, defamatory or slanderous. Please avoid outside hyperlinks inside the comment and avoid typing all capitalized comments. Help us delete comments that do not follow these guidelines by flagging them(mouse over a comment and click the flag icon on the right side). Do use these forums to voice your opinions and create healthy discourse.