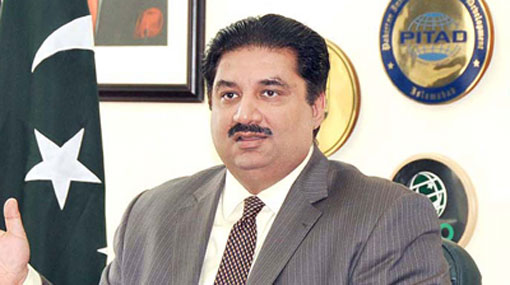 Pakistan’s Federal Minister for Commerce Engineer Khurram Dastgir Khan on Wednesday said that Free Trade agreement (FTA) with Sri Lanka would be further expended to promote bilateral trade between both the countries.

Talking to Ambassador Designate to Sri Lanka Major General (R) Shakeel Hussain in Islamabad, he said that government was working to improve the trade agreements with other countries.

The minister said that Pakistan give due importance to its trade relation with neighboring countries adding that during the upcoming visit of Sri Lankan President it would be discussed to further enhance the bilateral trade.

He directed the Ambassador designate for taking steps to promote cooperation between the private sectors of both the countries and use diplomacy to improve the image of the country.

TAGS :  FTA ,  Pakistan ,  Khurram Dastgir Khan ,  Shakeel Hussain ,  Islamabad ,
Disclaimer: All the comments will be moderated by the AD editorial. Abstain from posting comments that are obscene, defamatory or slanderous. Please avoid outside hyperlinks inside the comment and avoid typing all capitalized comments. Help us delete comments that do not follow these guidelines by flagging them(mouse over a comment and click the flag icon on the right side). Do use these forums to voice your opinions and create healthy discourse.