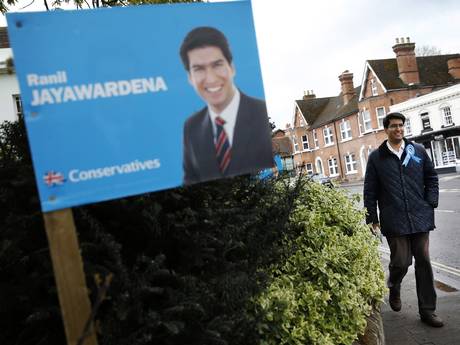 Ranil Jayawardena, Conservative Party candidate of Sri Lankan origin who was running for election in North East Hampshire, has been elected to the UK Parliament.

North East Hampshire is reportedly considered to be a safe Tory seat, which was comfortably won with a majority of over 18,000 votes in 2010.

Ranil, whose parents are from Sri Lanka, has served as a local Councillor since 2008 and is Deputy Leader of Basingstoke and Deane Borough Council.

He had been in the spotlight in the run up to the election when a rival British Parliamentary candidate from UK Independence Party (UKIP) was suspended after reportedly threatening to shoot Jayawardena.

Robert Blay, who was also running for election in North East Hampshire, had told undercover Daily Mirror reporters that he was prepared to “put a bullet between the eyes” of the Conservative Party lawmaker.

He added that Jayawardena had been tipped to become the country’s first Asian prime minister. “If this lad turns up to be our prime minister I will personally put a bullet in him. That’s how strong I feel about it,” he said.

“I won’t have this f***** as our prime minister. I absolutely loathe him.”

Blay went on to question Jayawardena’s ethnicity and background, saying: “His family have only been here since the ‘70s. You are not British enough to be in our Parliament.

A UKIP spokesman called his views “abhorrent” and said that Blay had been suspended from the party, the Telegraph reported.

Jayawardena was one of four political candidates of Sri Lankan origin who had contested this year.

TAGS :  Ranil Jayawardena ,  Sri Lankan origin ,  UK Parliament ,  UKIP ,
Disclaimer: All the comments will be moderated by the AD editorial. Abstain from posting comments that are obscene, defamatory or slanderous. Please avoid outside hyperlinks inside the comment and avoid typing all capitalized comments. Help us delete comments that do not follow these guidelines by flagging them(mouse over a comment and click the flag icon on the right side). Do use these forums to voice your opinions and create healthy discourse.