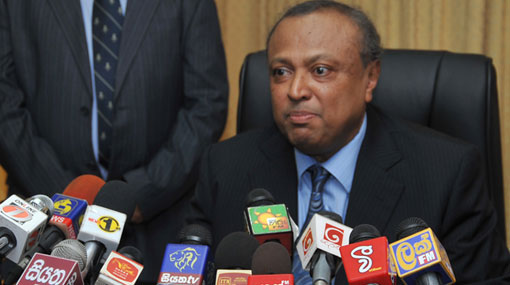 The Financial Crimes Investigation Division (FCID) is currently recording a statement from the former Secretary to the Ministry of Sports and the Ministry of Law and Order, Major General Nanda Mallawaarachchi, regarding alleged financial irregularities.

He was summoned to the FCID at 10.00am this morning for questioning regarding financial irregularities which had taken place within the Ministry of Sports, during his tenure as Secretary to the ministry.

Major General (Retd) Mallawaarachchi was the first Secretary of the Ministry of Law and Order, which was established in August 2013 under former President Mahinda Rajapaksa, and was replaced by former IGP Mahinda Balasuriya on October 21 the same year.

He was later appointed as the Secretary to the Ministry of Sports and officially assumed duties on Oct. 24, 2014.

Mallawaarachchi is a former Chief of Staff of the Sri Lankan Army and has also served as Sri Lankan Ambassador to Indonesia.

TAGS :  Nanda Mallawaarachchi ,  FCID ,  Chief of Staff ,  Mahinda Rajapaksa ,  Mahinda Balasuriya ,  Ministry of Sports ,  Ministry of Law & Order ,
Disclaimer: All the comments will be moderated by the AD editorial. Abstain from posting comments that are obscene, defamatory or slanderous. Please avoid outside hyperlinks inside the comment and avoid typing all capitalized comments. Help us delete comments that do not follow these guidelines by flagging them(mouse over a comment and click the flag icon on the right side). Do use these forums to voice your opinions and create healthy discourse.