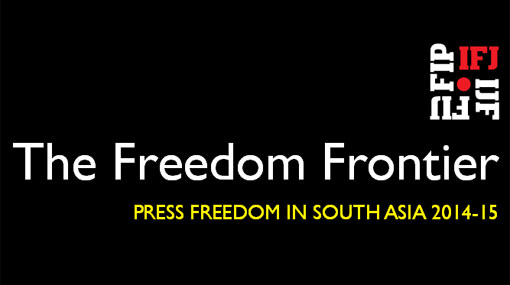 Journalists in Sri Lanka are among the most vulnerable in the South Asia, because attackers generally go scot-free, says a report of the International Federation of Journalists.

“The 2014 Impunity Index, published by the Committee to Protect Journalists, had revealed that Sri Lanka, Afghanistan, Pakistan and India as the worst offenders on impunity in the region. The situation, unfortunately, remains much the same,” noted the report titled ‘Freedom Frontier: Press Freedom in South Asia 2014-15’.

The report was jointly released by the International Federation of Journalists and the South Asia Media Solidarity Network (SAMSN) at a national consultation on the freedom of media, organised jointly by the Unesco and Prasar Bharati to observe World Press Freedom Day in New Delhi on Friday.

The report heavily criticized Sri Lanka’s former government under Mahinda Rajapaksa for its “total control of media” and “systematic muzzling of democratic dissent” while expressing hope on the promises made by the new government under President Maithripala Sirisena of “a new era of media reform.”

“One of the hallmarks of the Rajapaksa presidency in Sri Lanka was total control of media for the regime’s ends,” it said.

The report charged that the number of killings of journalists, abductions, assaults and attacks of media institutions that took place under Rajapaksa’s presidency were “unprecedented.”

“The number of Sri Lankan journalists who fled the county increased steadily under the Rajapaksa regime. Although killings and abductions of journalists ceased under his second term, terrorising the independent media and journalists continued unabated.”

“The State controlled media were transformed into a political propaganda machine which acted with total impunity in naming and shaming all shades of dissidents,” the report said.

“During the presidential election campaign, hate speech over state radio was employed to instill fear in the minds of voters and to create a climate of hate and prejudice.”

“The government-owned media acted in an arbitrary and haughty manner and paid no attention to even the Election Commissioner’s guidelines and warnings and showed callous disregard for accepted journalistic norms and practices and ethical behavior,” the report added.

TAGS :  IFJ ,  Press Freedom in South Asia 2014-15 ,  FMM ,  South Asia ,  India ,  Pakistan ,  Afghanistan ,  SAMSN ,  World Press Freedom Day ,
Disclaimer: All the comments will be moderated by the AD editorial. Abstain from posting comments that are obscene, defamatory or slanderous. Please avoid outside hyperlinks inside the comment and avoid typing all capitalized comments. Help us delete comments that do not follow these guidelines by flagging them(mouse over a comment and click the flag icon on the right side). Do use these forums to voice your opinions and create healthy discourse.