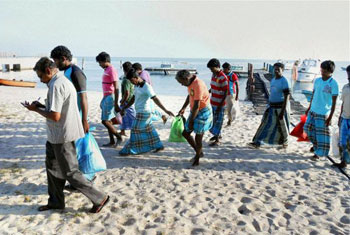 Sri Lankan President Maithripala Sirisena has ordered the release of 37 Indian fishermen lodged in various prisons of the island nation after a meeting with a delegation of five Indian fishermen.

President of Rameswaram Fishermen’s Association Sesuraja, who led the team to Sri Lanka, told PTI that Sirisena told them that the fishermen would be released soon.

But the Sri Lankan President did not mention about the Indian boats still in detention in Lanka, he said.

N Devadas, another leader of the association who was also a member in the delegation, said they also sought permission from Sri Lanka to fish in the Palk Straits as they were frequently attacked and arrested by the Lankan navy.

Sesuraja said they met Sirisena in a bid to sort out various problems faced by them while fishing in the traditional fishing areas in Palk Strait.

He said Sri Lanka had agreed to take steps for holding official level and fishermen level talks to sort problems faced by fishermen of the two countries, PTI reports.

TAGS :  India ,  Fishermen ,  Maithripala Sirisena ,
Disclaimer: All the comments will be moderated by the AD editorial. Abstain from posting comments that are obscene, defamatory or slanderous. Please avoid outside hyperlinks inside the comment and avoid typing all capitalized comments. Help us delete comments that do not follow these guidelines by flagging them(mouse over a comment and click the flag icon on the right side). Do use these forums to voice your opinions and create healthy discourse.