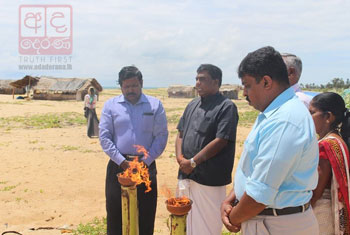 A remembrance week for Tamils killed in the last phase of conflict will be held from May 12-18, TNA Northern Provincial Councillor M.K. Sivajilingam said today. He added that commemoration events will be held in Tamil Nadu in line with those in Sri Lanka.

Several TNA officials were present at the first ceremony which was held at Vellamullivaikkal in the Mullaitivu District.

If people in the South are allowed to remember those who were killed in the riots and uprisings we also should be allowed to do so, Sivagiligam added.

TAGS :   M.K. Sivajilingam ,  TNA ,  War ,
Disclaimer: All the comments will be moderated by the AD editorial. Abstain from posting comments that are obscene, defamatory or slanderous. Please avoid outside hyperlinks inside the comment and avoid typing all capitalized comments. Help us delete comments that do not follow these guidelines by flagging them(mouse over a comment and click the flag icon on the right side). Do use these forums to voice your opinions and create healthy discourse.