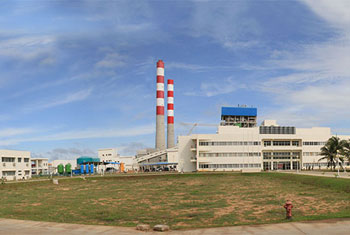 Sri Lankan says it has saved more than 700 million U.S. dollars as a result of a Chinese sponsored coal power plant which has been in operation in the north western part of the country since 2011.

Sri Lankan Power and Energy Minister Champika Ranawaka in a recent discussion with Chinese Embassy Deputy Head of Mission in Sri Lanka, Ren Faqiang noted that the Ceylon Electricity Board ( CEB) was earning a net profit of 1.5 million dollars daily if the three units of the Norochcholai Coal Power Plant was in full operation, making it the largest profitable entity in Sri Lanka.

During the discussions, both officials noted that the Plant generated around 40%- 60% electricity consumed by the whole country and in the past 8 months since the operation of Phase I and Phase II, the Plant had operated smoothly.

“The Plant has been operating safe and sound, it has not faced any malfunction since it commenced operations, which greatly relieves the pressure of the energy demand in Sri Lanka, and reduces the price of electricity,” a statement by the Chinese Embassy in Colombo said.

Ranawaka appreciated the hard work and professionalism of the Chinese experts and engineers who were helping operate the plant and added that China was a major development partner to Sri Lanka.

He further noted that the Sri Lankan government and its people were grateful to China for its long lasting support to Sri Lanka’s reconstruction and development efforts.

Ren said that China was a true friend of Sri Lanka, and the CEB and China Machinery Engineering Corporation (CMEC), the Contractor and technology provider of the Plant, were good partners.

Ren further said that one Kilo Watt generated by the Norochcholai Coal Power was only Rs. 8 while a diesel power plant costs around Rs. 30-50/KW, which saves money for all Sri Lankans.

The Norochcholai Coal Power plant is the country’s first coal power plant and it is funded by China’s EXIM bank as part of a preferential loan.

TAGS :  China ,  Norochcholai ,  Power Plant ,  Patali Champika Ranawaka ,
Disclaimer: All the comments will be moderated by the AD editorial. Abstain from posting comments that are obscene, defamatory or slanderous. Please avoid outside hyperlinks inside the comment and avoid typing all capitalized comments. Help us delete comments that do not follow these guidelines by flagging them(mouse over a comment and click the flag icon on the right side). Do use these forums to voice your opinions and create healthy discourse.