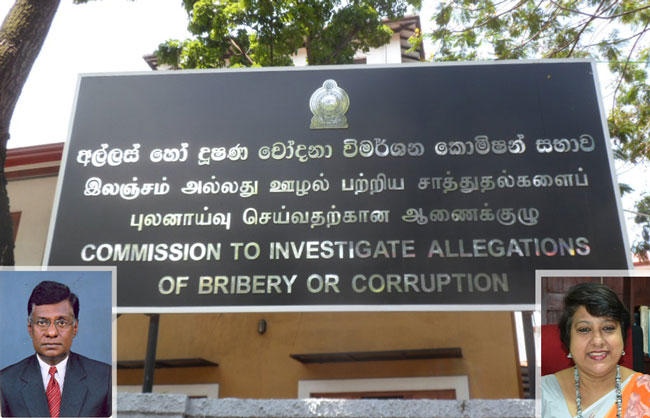 Justice L.K. Wimalachandra, a Commissioner of the Bribery Commission, has resigned with effect from Friday (15), the Director General of the commission Dilrukshi Dias Wickramasinghe said.

He had resigned to allow the appointing of new commissions in line with the 19th amendment coming into force since yesterday, she told Ada Derana.

With regard to the functioning of the commission under these circumstances, the Director General said that if there are transitional provisions included in the 19th amendment to the constitution, then the Commission to Investigate Allegations of Bribery or Corruption can continue with the two Commissioners.

However, if there are no such transitional provisions included in the 19th amendment with regard to the commission, new investigations cannot commence until they get new directions from the commissioners, she said.

Ms Wickramasinghe further said that the present commission can function and continue the investigations that have already commenced but it cannot file action.

But all functions of the Bribery Commission can continue as per usual, if transitional provisions are included in the 19th amendment, she reiterated.

The Director General of the Commission said that she has still not received an official copy of the 19th amendment and therefore she cannot comment on the future actions of the commission.

Justice Wimalachandra had served as the Commissioner of the Bribery Commission along with Dr. Jayantha Wickramaratne.

TAGS :  Bribery Commission ,  CIABC ,  L.K. Wimalachandra ,  Dilrukshi Dias Wickramasinghe ,  Dr. Jayantha Wickramaratne ,
Disclaimer: All the comments will be moderated by the AD editorial. Abstain from posting comments that are obscene, defamatory or slanderous. Please avoid outside hyperlinks inside the comment and avoid typing all capitalized comments. Help us delete comments that do not follow these guidelines by flagging them(mouse over a comment and click the flag icon on the right side). Do use these forums to voice your opinions and create healthy discourse.