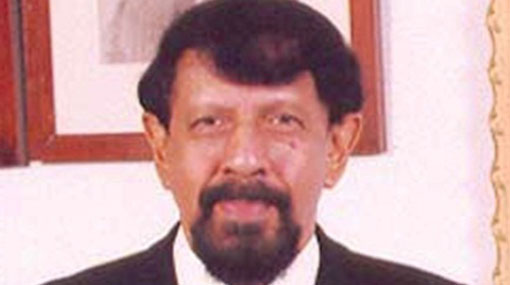 Somasundaram Skandakumar, originally from the country’s northern city of Jaffna and a past secretary of the Board of Control for Cricket in Sri Lanka, has been put forward as the next high commissioner to Australia.

The post has been vacant since January when the previous representative was recalled shortly after Sri Lanka’s surprise election result that toppled former president Mahinda Rajapaksa.

Australia was sharply criticised by human rights groups for close ties to the former Rajapaksa government and attempts to discourage Tamil asylum seekers from fleeing by boat.

Australia also opposed the establishment of a United Nations inquiry last year into the final months of Sri Lanka’s civil war, where thousands of civilians are believed to have perished.

The former high commissioner to Australia, Thisara Samarasinghe, was Mr Rajapaksa’s former navy chief in 2009 when the long-running war with the separatist Tamil Tigers ended.

But the election of Maithripala Sirisena this year came with the promise of fresh accountability and an end to the allegations of torture and nepotism that dogged the Rajapaksa years.

A spokesperson for Sri Lanka’s Ministry of Foreign Affairs confirmed the country’s parliament has been asked to approve Mr Skandakumar for the position in Australia.

Australia must also accept his nomination before he can take up the job.
Elaine Pearson, of Human Rights Watch in Australia, said it was unfortunate Australia had muted criticism of rights violations in win Sri Lanka’s support for “discredited” refugee policies.

“The recent change of government in Sri Lanka should be a lesson to Australia not to simply appease authoritarian rulers, but to listen to the voices of the people,” Ms Pearson said.

Mr Skandakumar was the former chairman of local firm George Stuarts and according to Sri Lankan media reports has worked in charity programs since his 2008 retirement.

TAGS :  Government ,  Australia ,  Tamil ,  Somasundaram Skandakumar ,
Disclaimer: All the comments will be moderated by the AD editorial. Abstain from posting comments that are obscene, defamatory or slanderous. Please avoid outside hyperlinks inside the comment and avoid typing all capitalized comments. Help us delete comments that do not follow these guidelines by flagging them(mouse over a comment and click the flag icon on the right side). Do use these forums to voice your opinions and create healthy discourse.