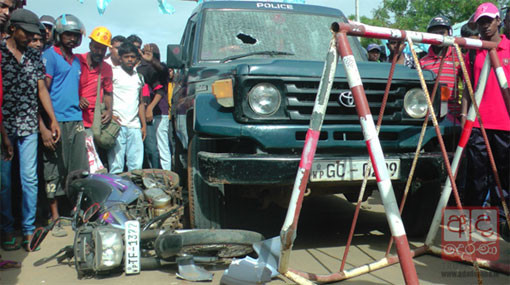 A tense situation was reported during a protest near the Hambantota Port this morning, when a police jeep collided with one of the protesters.

The protest was staged by a group of employees of the China Harbour Engineering Company Ltd. (CHEC), which is engaged in construction of the Hambantota Port Development Project (Phase 2).

A police jeep was dispatched from Hambantota Police Headquarters to the location of the agitation in order to monitor the event.

However, the police jeep had collided with one of the protesters, who was admitted to the Hambantota Hospital with minor injuries.

The incident had provoked the protesters who had proceeded to pelt stones and other objects at the police jeep, causing damage to its windows and windscreen, Ada Derana reporter said.

TAGS :  Hambantota Port ,  protest ,  CHEC ,  tense situation ,
Disclaimer: All the comments will be moderated by the AD editorial. Abstain from posting comments that are obscene, defamatory or slanderous. Please avoid outside hyperlinks inside the comment and avoid typing all capitalized comments. Help us delete comments that do not follow these guidelines by flagging them(mouse over a comment and click the flag icon on the right side). Do use these forums to voice your opinions and create healthy discourse.