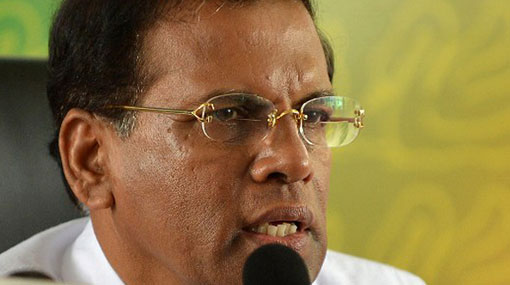 President Maithripala Sirisena today said that the Sri Lankan Parliament will be dissolved after appointing a constitutional council and that there will be a new Parliament by September.

The President made this announcement during a meeting with heads of media organisations at the Presidential Secretariat this morning.

Sirisena said that the government’s next mandate will be the General Election and that a final agreement has still not been reached with regard to which electoral system will be employed for the election.

Relevant discussions on the matter would take place today, he said, adding that he too imagines that the masses would require some time to get accustomed to a new electoral system.

The President said he believes that a majority of Parliamentarians would prefer the General Election this year being held under the existing system. However, he said that the Parliament has been granted the space to reach a final decision on the matter.

Sirisena, who is the Leader of the Sri Lanka Freedom Party (SLFP), said that he has issued instruction for the commencement of preparing party nominations for the upcoming election from today.

Responding to questions from journalists as to whether he had made a promise to the SLFP to dissolve the Financial Crimes Investigation Division (FCID), the President said that he has made no such promise.

However, Sirisena conceded that he is in discussion with Prime Minister Ranil Wickremesinghe regarding several paragraphs in the final chapter of the gazette notification issued with regard to establishing the special police unit.

The President stated that if any individual properly complains to him accusing the FCID of being politically biased he would look into it and that, however, so far it does not appear that the FCID has acted in such a manner.

In response to a question regarding the alleged coup plot on January 8, President Sirisena said that information has been received regarding a discussion held that day to impose curfew and suspend the release of election results and that investigations regarding this are ongoing.

TAGS :  Maithripala Sirisena ,  Parliament ,  Constitutional Council ,
Disclaimer: All the comments will be moderated by the AD editorial. Abstain from posting comments that are obscene, defamatory or slanderous. Please avoid outside hyperlinks inside the comment and avoid typing all capitalized comments. Help us delete comments that do not follow these guidelines by flagging them(mouse over a comment and click the flag icon on the right side). Do use these forums to voice your opinions and create healthy discourse.