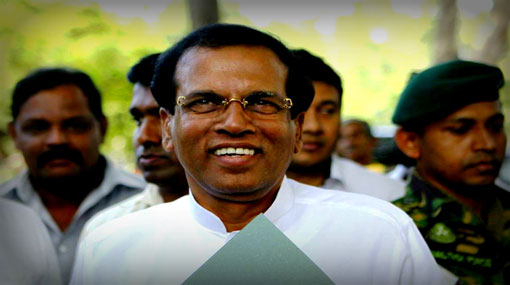 President Maithripala Sirisena on Wednesday said that he will not allow international investigators into the country to probe allegations over the war.

Speaking to newspaper editors, Sirisena said that a domestic system will be in place by June to investigate the allegations and local laws will be used to take action against anyone found guilty.

“We have had talks with the UN on the investigations. As a government we have told them we will not allow foreign investigators coming into Sri Lanka. However we will take advice from the UN and conduct a domestic investigation,” the president said.
The UN Human Rights Council is expected to submit a report on Sri Lanka at its September sessions.

“We need to brief the Human Rights Council in September on the domestic mechanism. So the mechanism will be in place by June. We will ensure our sovereignty is protected in the human rights investigation,” Sirisena said.

Sri Lanka defeated the Tamil Tiger rebels after a 30 years war in May 2009 but was accused of committing grave human rights violations during the final stage of the battle.

The former Sri Lankan government had rejected most of the allegations on human rights abuses and also refused to allow international investigators into the country.(Xinhua) --