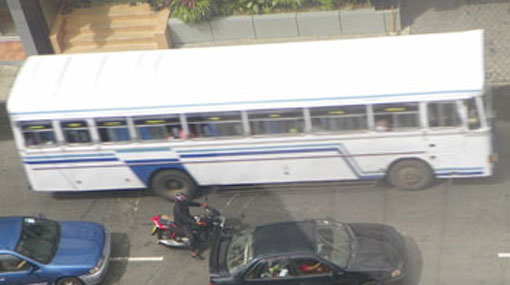 A group of private bus operators have launched a strike in protest of authorities allegedly allowing buses to operate on the Southern Expressway without valid permits.

The strike was launched from midnight yesterday by private buses providing normal passenger services between Colombo and southern cities such as Hambantota, Kataragama, Embilipitiya, Walasmulla, Middeniya and Weeraketiya.

All private buses operating from the Tangalle Town also joined the strike this morning.

The bus operators on strike claim that they have been faced with injustice due to the buses, allowed the ply the Southern Expressway without permits, commencing journeys from the aforementioned areas.

Meanwhile six bus operators have commenced a protest on the roof of the Tangalle Bus Stand demanding a solution to the issue.

TAGS :  Colombo ,  private bus ,  Southern Expressway ,  bus strike ,
Disclaimer: All the comments will be moderated by the AD editorial. Abstain from posting comments that are obscene, defamatory or slanderous. Please avoid outside hyperlinks inside the comment and avoid typing all capitalized comments. Help us delete comments that do not follow these guidelines by flagging them(mouse over a comment and click the flag icon on the right side). Do use these forums to voice your opinions and create healthy discourse.