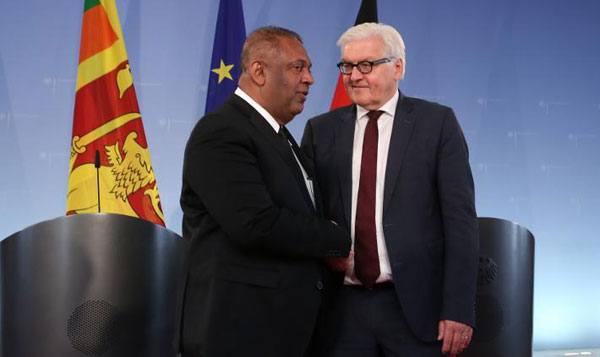 Mangala Samaraweera was addressing the media following a bilateral meeting with his German counterpart Dr. Frank-Walter Steinmeier on Friday (22) at the German Federal Foreign Office in Berlin.

Samaraweera said that he briefed the German foreign minister regarding the progress that Sri Lanka has made since the Presidential election on the 8th of January.

“Steps taken to restore democracy, strengthen institutions, legislative reform, transfer of some of the powers of the Executive Presidency to the Parliament, strengthening rule of law, creating more accountable governance, combating corruption and taking necessary measures for meaningful reconciliation aimed at achieving enduring peace and prosperity for all Sri Lankans.”

Samaraweera said they also discussed the new Government’s approach of engaging with the international community including international organizations, the challenges that lie ahead and the ways in which Germany and Sri Lanka can renew cooperation as a result of the developments in Sri Lanka.

“I am happy that we are able to now intensify cooperation between Sri Lanka and Germany that will help cement our strong ties further,” he said.

With relatively well developed infrastructure and human capital, our immediate priority is to reset the investment climate by making Sri Lanka a secure, efficient and competitive investment destination in South Asia, the foreign minister said.

He stated that the government has re-established the independence of the judiciary and that they are in the process of creating a rule based system where all companies will enjoy a level-playing field.

We are making our economy more efficient through smarter regulations. Efficiency will also be improved through the reviving of a “one stop investment shop,” he asserted.

Samaraweera pointed out that Germany is an important trading partner for Sri Lanka and that the Sri Lankan government wants to see trade between the two countries expand further.

He also invited Foreign Minister Steinmeier to visit Sri Lanka at an early opportunity to “ensure that we intensify the momentum of our already growing multi-faceted relationship.”

TAGS :  Mangala Samaraweera ,  Dr. Frank-Walter Steinmeier ,  Sri Lanka ,  Germany ,  Berlin ,  Foreign Ministry ,
Disclaimer: All the comments will be moderated by the AD editorial. Abstain from posting comments that are obscene, defamatory or slanderous. Please avoid outside hyperlinks inside the comment and avoid typing all capitalized comments. Help us delete comments that do not follow these guidelines by flagging them(mouse over a comment and click the flag icon on the right side). Do use these forums to voice your opinions and create healthy discourse.